I decided to do a first impression on The Ancient Magus’ Bride series that is currently airing. As I am only 3 episodes into this series I wanted to write about it but do not have a full series to review so I thought my first impressions would be the way to go. 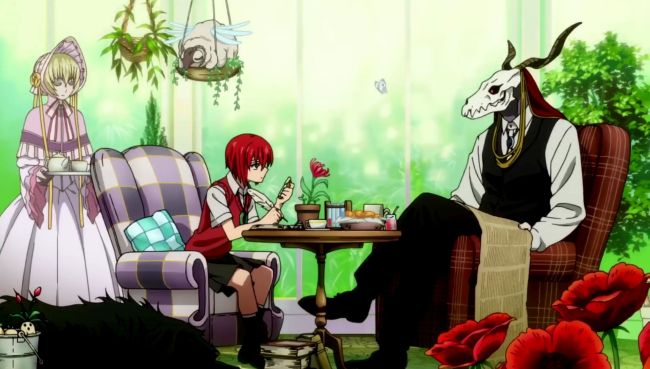 Having heard of this series for a while I decided to give it a go when Funimation announced they were dubbing it. The basic premise of the show is that Chise Hatori is a 15 year old girl who is hopelessly lost with no family to speak of. She is sold to a mage named Elias and becomes not only his apprentice but also his future wife. From what I have watched so far it looks like it will continue to develop the relationship between Chise and Elias.

So far I’m really impressed with this show. It is one of those anime that is just over 20 minutes long but it feels like 5 minutes because I get so engrossed in the story and feel disappointed when it is over and I have to wait another week for the next instalment. I find this show very magical and enchanting and love almost everything about it. Almost everything. The reason I say almost is I am unsure of Chise and Elias’s relationship. I mean I’m fine with the whole mages apprentice aspect of their relationship that’s totally cool with me but the whole marriage thing doesn’t sit right with me. I think the reason being is due to the fact that just after they first met Elias immediately wants Chise to be his wife…why? I don’t get it. I think I question this idea is because in my mind:

1.Why would you marry mister cow? Deer? Some sort of animal skeleton face in the first place? I did like his human form and wondered why he couldn’t just stay like that the entire time.

Look at him he looks so much cuter this way! Even if Chise disagrees. (Sourced from Google Images)

2.Why are you asking some poor, helpless girl who has clearly been through a very rough time a question like that just after meeting?

Maybe over time the story will unfold as to why this is the case but for the time being I’m a little confused about it.

The soundtrack is one of my favourite elements of this show as it has both a gorgeous opening and closing song and the music throughout the episodes really adds to the magic of the show. The art style of the show is also beautiful and really helps to bring this world of magic to life. I also have to give praise to the english dub cast so far as I am extremely impressed with Chise’s voice actor Dani Chambers. I am unfamiliar with her english VA but I think she does an impressive job of having this almost expressionless voice but it is not flat. It still holds many emotions and she creates the feeling of a tired, lonely girl who is confused and lost in the world without making her sound bland or like an unfeeling robot.

I definitely recommend The Ancient Magus’ Bride to anyone who has yet to see it. So far it’s easily living up to the hype that has been going around the series and I hope that continues as the show progresses.