Once again I’m adding something new to this little blog of mine (I hope you don’t mind being constantly bombarded with new content that I want to explore and try out). So I give you my first live concert review! 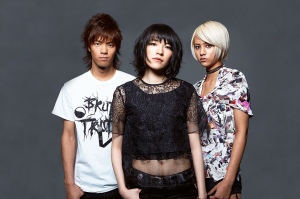 Last week I went to see the band Touch My Secret. They are a Japanese rock band that consist of three members. The members include Anne who is lead vocalist and stand alone lead and rhythm guitarist, Chloe on bass guitar and backing vocals and Louie on drums. They seem to be a fairly new band on the Japanese rock scene and according to the internet have been going since 2015.

“My English is bad” stated lead vocalist and stand alone guitarist Anne. She then exclaimed with a hint of her Japanese accent “Maybe you can’t understand Japanese lyrics but **** it” before flashing a grin at the audience. The thing is music doesn’t need to be in a certain language in order to understand and enjoy the feelings and emotions being conveyed by a song. Music is universal. For everyone to enjoy no matter the language.

Touch My Secret were wild. They went from being very calm and quiet off stage to a whirlwind of head banging and swaying bodies to the rhythm of the music on stage. It only takes three to make so much epic, J-rock noise. Drummer Louie rips into a massive drum solo so intense it was almost as if he has a personal vendetta against the drums itself, and that was before the show had even really started. The intense solo was only a taster of what was to come. The rest of the night flew by as the audience was transported to the land of the rising sun and it’s ability to rock. Touch My Secret’s entire set was a combination of rock and metal leaving barely any time to rest from each songs head banging session. Many of the metal breakdowns were so heavy it felt like you were falling down into the pits of hell (in the best way possible) before dragging you back up to watch as Anne jumps onto the front stage monitors hypnotising the audience with her awesome solo skills. Although their tracks often became very heavy there were times when they mellowed and softer, bittersweet songs bloomed from their instruments making the audience sway to the rhythm. They may have played to a small audience in a tiny cafe but the Eastern energy they brought to this Western audience certainly left a massive impact upon us all. 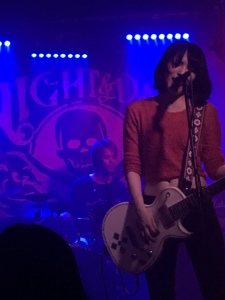 It’s a real shame that this band isn’t bigger because they were an A+ act that can perform at such a high and professional standard. Anne, Chloe and Louie are incredibly talented and as a guitarist myself I truly admired Anne and her ability to sing lead vocals whilst also performing both rhythm and lead guitar with absolute certainty. One of the best gigs I have been to in a long time putting even some of the biggest acts I have seen to shame. Definitely a band worth checking out if you are into rock, metal and kickass band members!

Would I see them again: In a heartbeat!