Available on: Blu-ray and DVD

Nishimiya Shouko is a deaf girl who transfers into a new class in elementary school. She lets her peers know she cannot hear and to use a notebook to communicate. Shouko’s deafness leads her to become bullied by many in her class. This relentless bullying makes her transfer schools. Years later one of the biggest bullies named Ishida Shouya decides he wants to make things right and make amends.

First of all I have to say this film made me cry like a baby and hit a bit to close to home. Not many anime films have much of an impact on me but this one certainly did. As usual Kyoto Animation did a superb job on visuals so I don’t have much to say other than that in terms of animation style. They never disappoint.

The messages within this film were incredibly important and were executed in such a beautiful, sad and moving way. The main theme of bullying which was accompanied by the attempts of suicide due to the bullying along with someone being singled out for being different really stuck a chord with me and left me as an emotional mess both during and after the film. I think because I found myself relating to the characters and how they were feeling is why it was such an emotional experience because it’s not often when you can watch something and know exactly how the character is feeling because you have been there yourself in your own way.

I enjoyed the fact that Kyoto Animation tackled a film about deafness as I have only seen a deaf character once in anime which was Nicolas Brown in Gangsta. Deaf characters are a rarity in all kinds of media and so when it does come up I find it an interesting topic. I loved the use of sign languages as I think it is a beautiful thing for people to be able to communicate through hand gestures.

I found both the feelings of Shouko and Shouya to be both relatable and upsetting. Whilst I don’t relate to Shouya and his bully like qualities in his younger self I did understand when he decided to block everyone out because he couldn’t face them. I thought that was something to note as it was Shouya’s karma and he began to understand and feel what he had done to Shouko and the consequences of his actions as well as how others can turn on people so quickly. I admire his change of heart and need to fix things and I love his courage of trying to make a real friendship with not only Shouko but also others in his class. The X’s plastered across everyone’s face is something I found interesting as this was a unique way to signify Shouya had blocked out everyone as he couldn’t deal with others. I know how easy it is to push others away and block people out so life can be a bit easier and that this was an interesting way to signify this. I also loved how when he finally let people in the X’s dropped away which was a nice touch and gave an idea of who he allowed into his life.

I also related with Shouko as although I’m not deaf I know how it feels to be different and singled out for reasons you cannot control. Her kindness to everyone was beautiful and her ability to keep trying was admirable. One thing that really resonated with me was her habit of constantly apologising. This is a hardcore habit of mine. The scene in which Shouko gets down on her knees and apologises set me off (and I never full on cry at anything on TV) as I understood and related to her and her way of thinking. 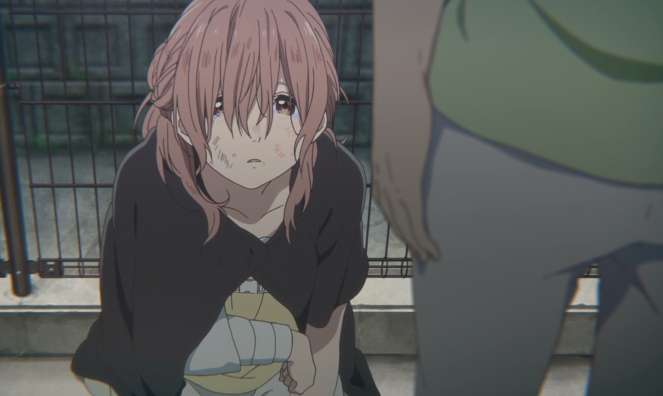 I watched the English dub of A Silent Voice and one of the best things by far that impressed me was the fact that they used Lexi Marman Cowden who is an actual deaf actress to play the part of Shouko. This might be a silly thing to be impressed by but honestly that fact made Shouko that much authentic and it was such a clever touch to bring her character to life. Bringing in a deaf actress to play a deaf character means that there will be far more emotional drive and feelings conveyed as the actor knows what it feels like and isn’t just acting and faking it.

As mentioned before the themes within this film are incredibly important and relevant in todays society. Bullying, suicide and being different for reasons out of your control are topics that need to be talked about more in film, TV and animation and I think A Silent Voice did an excellent and effective job of tackling these issues. This is one my favourite if not my favourite anime film of all time.

I feel like this post has been quite personal (maybe it’s just me thinking that) as this film covered topics that hit close to home. I hope my ramblings with this film has been of some interest. I recommend anyone and everyone to go and check out A Silent Voice.

What did you think of this film? Have you seen it or not? Are you going to check it out? I’d love to hear your thoughts down in the comments below.

Grab a copy of A Silent Voice for yourself off of Amazon.co.uk