Since Valentine’s Day is coming up I thought I would do a themed post to go with this occasion (this post is the only good thing to come out of Valentine’s for me). So whether you’re spending Valentines with your partner or if you’re spending it as a single human being (it’s ok we can be single together) I thought I’d give my top anime to watch during this occasion! This recommendation list will be in no particular order. Hope you enjoy!

The best way to describe My Love Story is it’s soft and pure. The story is about Takeo Goda who isn’t your typical shoujo anime protagonist. He is a very large, very manly and at first a quite intimidating looking high school student who has a heart as pure as gold. He falls in love with Rinko Yamato and follow his perspective of their story. At first Takeo thinks Rinko is in love with his best friend who happens to fit the typical bishounen boy look but fortunatly for him he is mistaken. This adorable anime follows Takeo and his relationship with Rinko. My Love Story is one of the sweetest shows I think I have ever watched and is perfect for Valentine’s Day. It’s very lighthearted and has a certain scene with some plastic wrap that is a masterpiece in comedy and awkward moments!

I mean, obviously Ouran was going to make it into this list. It’s a classic! I feel like I don’t even need to give a synopsis of this show but just in case you haven’t checked out this show here it is. Haruhi Fujioka is a smart high school student on a scholarship at a rich kids school. She is looking for a quiet place to study one day and comes across a music room which she believes to be empty. In it she finds the host club a group of rich boys who entertain girls. In her panic she knocks over and breaks a 8 million yen vase and has to work as a host in order to pay off her debt. This is such a classic and is a must watch for any anime fan! The funny, cute and silly antics of the host club are always a delight!

Kaichou wa Maid-sama is one of my all time favourites. The show follows Misaki Ayuzawa who is student body president of what used to be an all boys school which has now turned co-ed. Misaki hates all men due to her father leaving and loves and sticks up for all women. As her family struggle money wise Misaki has to work part time jobs as well as be president. She secretly works as a maid in a maid cafe in order to pay the bills. One day the handsome Takumi Usui from her school discovers her secret and becomes a regular at the cafe in order to taunt and tease her. Kaichou wa Main-sama follows Misaki and Usui’s complex and adorable relationship and makes for such a cute and cosy watch.

The perfect romance about humans and yokai! Nanami Momozono is an average high school girl who’s father is a big gambler. Her father’s debts pile up and she ends up getting thrown out of her home and has no where to go. She meets a strange man who is perched in a tree due to his fear of cats. She saves this man named Mikage and he gives his home to her to reward her for saving him before disappearing. His home turns out to be a shrine where she meets spirits and a familiar named Tomoe. Nanami ends up becoming a land god and has to adjust to her new life and responsibilities whilst dealing with her feelings for Tomoe. As someone who loves anime about demons and spirits I think this is such as fun watch as it mixes supernatural with shoujo.

Ah yes, tsunderes! Ryuji Takasu is a delinquent looking high school student who hates his intimidating appearance and is actually a genuinely nice guy. He ends up crossing paths with the angry little ball of tsundere named Taiga Aikawa. Taiga has a snappy attitude to everyone and is prone to violence and general negativity. Ryuji and Taiga end up teaming up in order to get themselves with their crushes. Toradora follows them as they work together to impress their crushes but a whole new outcome blossoms from it. Although I’m not fond of tsunderes this anime is adorable and Ryuji and Taiga’s relationship is beautiful to watch!

Kiss Him, Not Me! 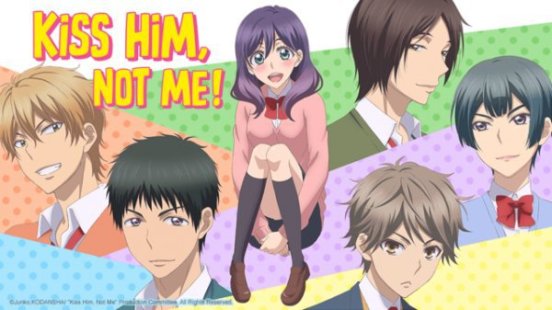 Kiss Him Not Me isn’t your typical romantic comedy. The show follows Kae Serinuma who is an otaku and fujoshi. Her otaku interests include anime, manga and shipping boys together romantically. One day whilst watching anime Kae’s favourite character dies and in her despair she locks herself in her room for a week. She eventually comes out of her room to find out she has lost all the weight she was carrying and has become a beautiful bishoujo girl. She goes back to school where she catches the attention of four boys who begin to fall for her. They then find out that she is a fujoshi and she would rather see them get together instead of get with her. This funny and twisted around shoujo anime follows Kae, her friends and her fujoshi dreams. Although this isn’t the typical romance many crave it’s worth watching as it’s funny, cute and often relatable (I love otaku characters especially female ones)!

These are my recommendations for Valentine’s Day! They are perfect for this romantic holiday but are fun during any time in the year! This list is only a small handful of all the wonderful shoujo series that are out there, but these are the main ones that came to mind when I think of romance.