Akihabara is the first topic I have chosen for my Nerdy Travels series from my Japan trip last September. Akihabara is also referred to as Akiba or Akihabara Electric Town. Akihabara is a shortened version of Akibagahara which means “autumn leaf field”. It gained the named Akihabara Electric Town after WW2 when the district became famous for dealing with electronic goods as well as black market goods. The district has now blossomed into the primary hub for otaku as it sells and advertises all kinds of otaku goods.

Akihabara is every otaku’s idea of heaven. I was stupendously excited to visit Akiba. The first thing I can say about it is its pretty overwhelming. I remember coming out of Akihabara station and seeing the big SEGA arcade and thinking “I’m here…I’m actually here”. I also remembering standing there thinking “I don’t know where to start” because it’s massive. Like MASSIVE! There are an incredibly amount of stores packed and each store it jammed full with otaku goods of every kind. A lot of the stores also blasted out idol and anime music which was amazing (you just can’t get the My Hero Academia or Yuri on Ice themes playing in UK stores for some strange reason) but also often added to the overwhelming aspect of the experience. When we headed down to Akiba it was usually during the evening as our hotel was a train ride away from there and so we went when everything was lit up for the night. The music, lights and stores packed with otaku goods was honestly overwhelming for the senses. It was like an attack on your brain but in the best way possible.

When we first got to Akihabara I hadn’t eaten properly in about 24 hours. This was because this was the first thing we did when we arrived in Japan and unfortunately the start of the trip didn’t go so well. I was extremely ill on the plane, then the airport lost my luggage (I got it back though) and then I had a migraine. Not the best way to start my dream trip but it was all good after that! Anyway we arrived in Akiba after everything had calmed down and the first thing we did (unexpectedly I might add) was go to a cosplay cafe. I will give more information on my experience in another post but it was an interesting first experience in the holy land.

An ad for Classroom of the Elite in Akihabara station 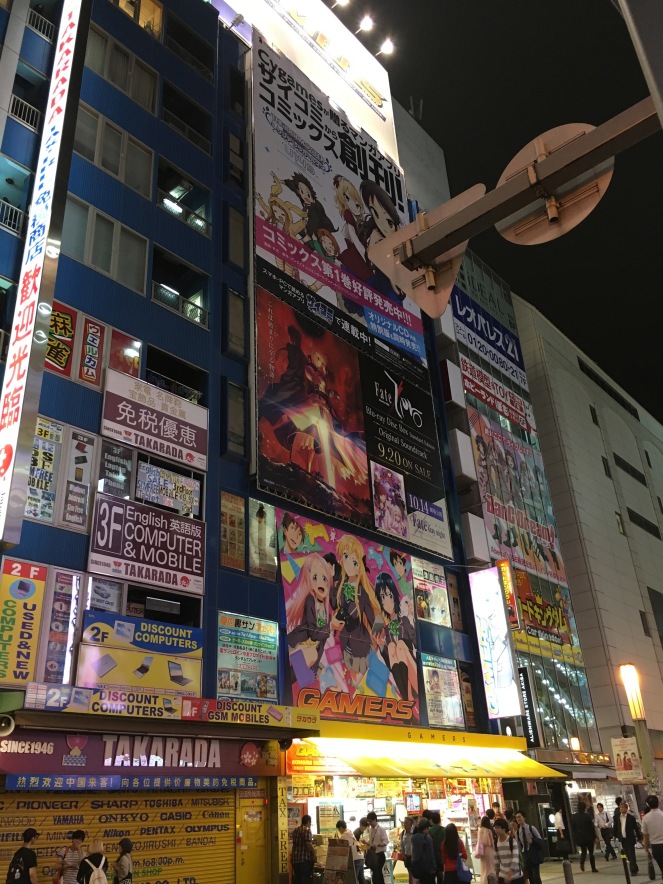 As we were close by we visited the district a lot which gave me a lot of time to explore. I managed to visit most of the stores that I wanted to. I think one of my favourites included Toranoana which is a doujinshi store which I was obsessed with visiting as it had so much to offer and look at. I also loved stores like Animate, Radio Kaikan and Kotobukiya as they have floors and floors of anime goods. Hobby Paradise is another amazing multi-storey store as its like a garage sale for otakus. People can actually sell their figures and other merchandise in the store so there is always the possibility of finding a good deal in there. I also loved second hand stores as you can find things that you might be looking for at a cheaper price. I recommend Traders (where I got the beautiful 10th anniversary Super Sonico figure) and also Akihabara Culture Zone as they have different stores on different levels. The first two floors are full of DVDs, books, figures and keychains so I highly recommend that section.

We visited a cosplay cafe as well as a maid cafe (more on that in another post) and we also did something pretty interesting that I doubt most people do when they go to Japan. We went to an idol concert…but seriously how many people can say they did that?! I take great satisfaction being able to say that (even if people give me weird looks when I tell them about it). If you want to read more about that experience then check it out here. We also visited the Love Live shrine which was very exciting for me as it was my first time visiting a mecca of anime. Funnily enough we struggled to find the shrine and I found it through recognising the steps (thank you steps for showing me the way).

One thing I did notice in Akiba is it’s targeted primarily for the male otaku. I say this because for one thing I was usually the only female in stores like Animate or Toranoana (besides my mum). The other thing is that a lot of the goods in these stores was focused around Love Live, Eromanga Sensei, Is the Order a Rabbit, etc. Anything and everything to do with cute girls, Akihabara is your place! This isn’t a criticism but it’s something I noticed while making my way around the area. There were so many guys and it never really clicked before going that that would be the case but it was and it’s just an observation I made. I think if you are looking for more anime targeted towards female otaku then check out Ikebukuro as well. That way you get the best of both districts!

Akihabara left a lasting impression on me that I will never forget. I had wanted to visit the place for such a long time that I cried when we had to leave (I’m a huge crybaby though).

Am I even qualified to give advice? Probably not but I’m giving it anyway.

Research is key especially when travelling. Go online and watch videos, read blogs or look at travel books to see where you want to go and prioritise the places you want to see the  most! I learnt the hard way that it isn’t always easy to find the stores you want and searching around can waste time so make sure you see the places you really want to first and then other stores can come later or be missed if your on a time limit. Make a list and see if you can figure out the area on a map before you get there.

I’m joking of course. But seriously there is an insane amount of Love Live in Akihabara. I noticed that certain anime that is really popular such as Love Live is huge in Akiba and so be prepared to be bombarded by certain anime titles. When I visited Eromanga Sensei was also still going strong and I notice that a lot of stores like Animate (Animate really stuck out in terms of this) tailored to new and super popular anime so if you’re looking for older or less popular series you won’t find it there. Second hand stores are always a good option for other older or less popular series!

I don’t feel that Akiba can be done in a day. Or several days for that fact as even I missed out on some parts because we just didn’t have the time. Make sure if visiting that you set aside a good chunk of time in order to see what you want to see. This can be said for whatever you want to do. So if you really want a good Akihabara experience make sure you have plenty of time and prioritise the most important things that you want to see!

I hope this was interesting and I haven’t just rambled on forever. I also want to point out that I’m not trying to brag or anything like that! I just want to share my experiences as well as tips with you in hopes that it’ll make for an interesting read and maybe help those that might be traveling to Japan at some point!