Hozuki no Reitetsu revolves around the demon ogre Hozuki who is works under Lord Enma, the king of Japanese Hell. As the right hand man of the King Hozuki takes care of any problems that may arise. The series follows Hozuki and his co-workers as he basically runs the demonic business known as Hell all while keeping a cool head.

It’s no secret that I am a huge fan of comedy anime and Hozuki no Reitetsu or Hozuki’s Coolheadness definitely fit the bill. I’m also a fan of shows involving demons and other supernatural creates so I couldn’t ask for anything better than a comedy anime set in hell.

I’ve always enjoyed the Japanese twist on topics such as heaven and hell and everything that goes along with it. Many series such as Hozuki no Reitetsu show demons from another perspective other than evil beings who torment humans. Anime has even created villainous characters out of angels and made demons the ultimate “good guys” of the show. As an atheist I always find these points of view intriguing and it’s always something I take great interest in when it comes to anime and it’s characters. Maybe it is due to the fact that I don’t believe and so I cannot take offensive by what is presented to me. Whatever the reason might actually be, it’s always fascinating.

One of the best elements this show had to offer was the fact that Hell is run as a business. It’s not a chaotic mess of eternal torture and anguish. It’s a well oiled machine split into areas and categories depending on the sin of the person. Hell has its own hierarchy system and demons make a living from their jobs and many seem happy with what they do for a living. It makes it seem like a normal day to day job and that normality is what made it so brilliant. There were scenes where humans were being tortured or blood and weapons were covering the place and the characters were very casual as it’s what they are used to. That normality in what people would call a disturbing setting was humorous. It somehow made the demons seem less frightening because they just get on with their lives and what they have to do. They aren’t bloodthirsty monsters 24/7.

This show made hell so cute and causal.

The characters were a brilliant bunch. The fact that hell differs depending on the country and characters from different places interacted with each other made the concept funnier to me. Heaven and Hell were almost like the world we know now but in the next life. People can travel around and visit the areas freely. When I think about the concept of heaven and hell I always just think of one place and then you are permanently stuck there forever. This series put into practice the idea of each country having its own separate afterlife going on at the same time as all the others according to their own history and legends. Nothing was right or wrong instead each country had its own version which coincided peacefully with each other. That concept made this atheist so happy.

The main character Hozuki really capture my attention. The fact that he is the Lord Enma’s right hand man but basically runs the show himself is a brilliant way of portraying a demonic character as it reflects a demons ability to be smart, sneaky and cunning. Lord Enma is the top dog in terms of decision making but he relies on Hozuki for most things and Hozuki knows this. He is irreplaceable in this sense and therefore can do and say what he wants without any backlash. He even admits to running everything behind the scenes in front of Lord Enma. His character is both likeable and fitting for this kind of setting. 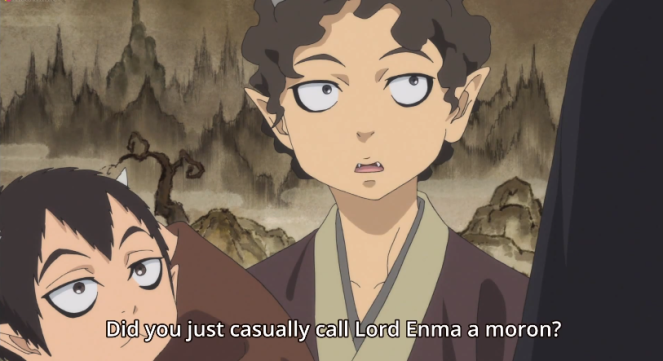 I also want to quickly mention that the references in this anime were on point. My jaw hit the floor when some of the characters from My Little Monster appeared casually walking through hell. 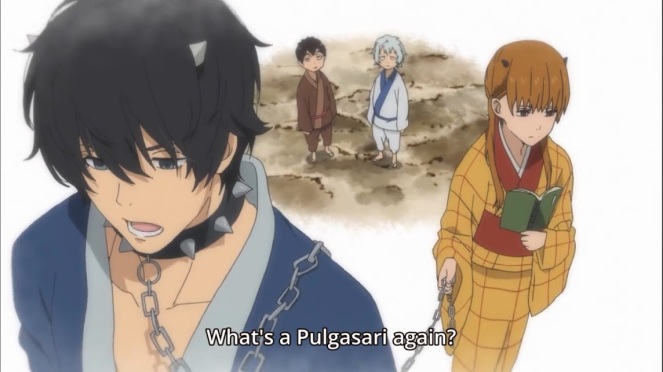 I love anime references so much.