In a world similar to our own exists horse girls who race and compete as their real life horse counterparts did in our own world. Special Week is one of these horse girls. She originates from the countryside but dreams of becoming the best horse girl in Japan in keeping with the promise she made with her mother. She moves to Tokyo and transfers into Tracen Academy in order to fulfil her dream and her promise.

I remember starting this anime at the beginning of the spring season and every part of  me was saying this was going to be a flop which I would drop within a matter of episodes. I was wrong, so very wrong. Although this isn’t the greatest anime ever to exist it pummelled my meek expectation and race forward (get it?) into being a very satisfactory series.

I had a lot of questions when watching the first couple of episodes of Uma Musume. Why was there only a select amount of horse girls while everyone else was human? Why did Special Week have a human mother? Why on earth was she called Special Week? Their horse girls who race and also sing as idols? Suffice to say my burning questions were answered swiftly and before I knew it I was emerged in this adorable horse girl filled world.

Characters always make up a huge part of anime. If a series has poor characters my attention has already started to disintegrate. This show had a range of fun, uniquely designed characters who were likeable and were easy to route for. Sometimes cute girls can all blend together a bit in a series but this did far from that. The design of each character was so different to one another that I picked up on characters fairly quickly. One of the best elements for the design was the fact that all the girls were based off of real race horses. The fact that they took the original horses hair colours, unique patterns on the fur and specific colours or gear worn by the horses and incorporated it into the character designs was a nice touch. There wasn’t a single character I didn’t like in Uma Musume. Special Week was a great as far as protagonists go. She wasn’t too weak or too strong and so the series could balance her victories and losses well without leaning too far one way. She was easy to both cheer and cry for and her journey didn’t seem too far fetched.

It’s always fascinating to see anime adapt real life into a series and throw in their own artistic twist. However, as this series was focused around racing horse girls who are based off of actual horses it meant that the races in the anime could potentially be spoiled with a simple search on Google. This is the only real downside to creating an anime based off of real life events. A nice touch that they did include in this series however was the fact that when the girls were racing it sounded just like horses galloping. The attention to those kinds of details really helped make it shine.

One of the things I find most irksome when watching anime is when you get a foreign character speaking fluent Japanese who doesn’t originate from Japan or have any experience of the language within a setting where everyone is Japanese or speaks it fluently. It’s just always something that bothers me within certain settings so the fact that Broye only spoke French with Japanese subtitles to compensate really satisfied this weird complaint of mine. I found it a nice, genuine touch. It made it seem more realistic as language barriers do exist.

The only real downside for this series was Trainer-san and his interesting scouting habits. It’s very unnerving to see random men wander over to girls and start groping their legs and getting nose bleeds over how well developed said legs are. Thankfully as per usual in anime he got quite the beating from Special Week. I also appreciated how she kicked him as she did it whilst he was behind her and her kick imitated how a real horse would probably kick. 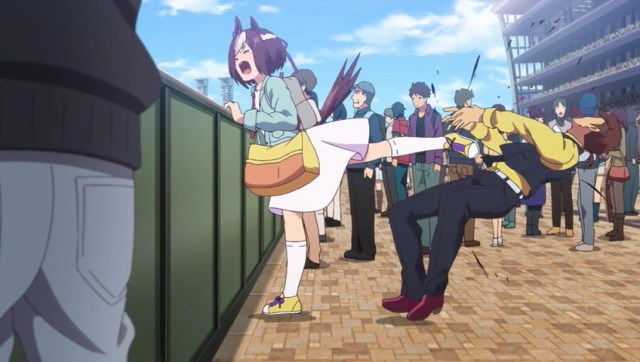 Uma Musume: Pretty Derby is a series I recommend to anyone especially if you love cute anime girls combined with an interesting sport concept that keeps your attention and gets the heart pumping. Plus the fine attention to detail within this series can satisfy the most nit-picky of otaku. 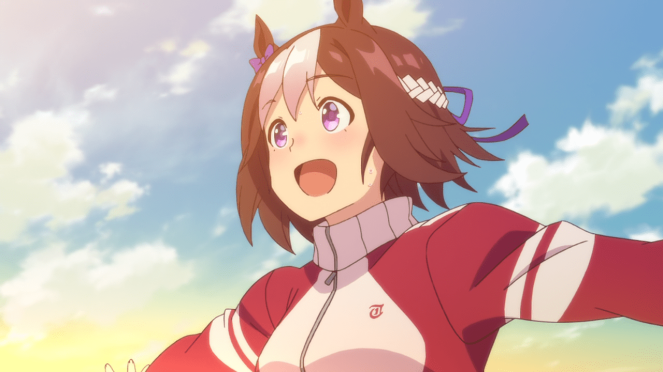