A couple of weeks ago I hit the amazing milestone of 200 followers on my blog! So let’s start this post off with this:

I want to say a huge thank you to everyone who has given my little blog a chance. Many of you have been so amazing and I’ve made some wonderful friends so far. You guys are all so lovely and I cannot thank you enough. I appreciate each and every one of you! I asked you guys on twitter to send me some questions and I got some amazing ones to answer. Without further ado here is the Q&A!

How much time do you spend screaming into the abyss? – @JScheibelein on Twitter

I’d say about once a day. I think that’s a healthy amount of time for me personally. If I don’t do at least a scream a day I’ll go mad. A scream a day keeps the doctor away.

Would you rather switch lives with your favourite anime character for a day or bring them into the real world? – @paperpandabears on Twitter

If you could create your own harem who would you pick? – @MelinAnimeland on Twitter

Off of the top of my head I’d say:

Imouto – Chino from Is the Order a Rabbit?

What song describes you as a person (or current mood, if that’s easier)? – @The_Moyatorium on Twitter

I’ve thought long and hard about this question but struggle to come up with anything that could possibly describe myself. Maybe because I still listen to plenty of angsty music from my emo days and nothing really fits properly. Even for a current mood is difficult for me. For some reason NIRVO’s track Heart of Courage comes to mind to but I think electronic music as a whole describes my current mood. Especially Glitch Hop and Kawaii Bass tracks as they are always upbeat and bouncy. Plus they give me summer vibes and I’ve been thinking a lot about my next holiday. I feel like this is a copout answer but this is all I got. Please forgive my terrible answer!

A red pill takes you to any anime world and the blue pill lets you bring an anime character to your world. Which would you choose? – @itsananimething on Twitter

Since I answered the previous question similar to this with bringing an anime character here I’m going to say I’ll take a red pill please! Take me to an anime world red pill! Well, only on the condition that it’s a nice, painful death free anime world, nothing like Attack on Titan or Tokyo Ghoul. I’d like to step into a comedy anime or some kind of slice of life. Any anime that’s super fun and doesn’t end in complete destruction and tragedy. As you can tell I don’t live on the edge.

Who are two characters you relate with as a person? – @Kinoreviews on Twitter 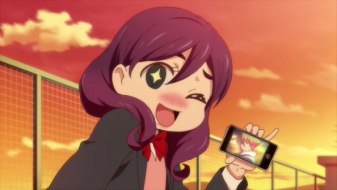 I think the two characters I relate to most are probably Houtarou from Hyouka and Serinuma from Kiss Him Not Me. Houtatrou is my lazy side whilst Serinuma is my otaku side and I feel they sum up the biggest parts of my personality very well. To summarise, I’m a lazy otaku.

A couple of things drive me to blog. The first being that I’m a very dedicated person. Once I put my mind to something I won’t quit and I never do anything half-heartedly. The second reason is that this an outlet for me and my hobbies so that really drives my production and creativity as I’m free to talk about what I want when I want. The last reason is that since I’m a uni student I’m trying to not only improve my writing skills but also build some kind of business/ help towards a CV for myself while I study.

Do you like/want tattoos? If so would you ever consider getting an anime/otaku related one, if you don’t have one already? – @Nek0Nyaan on Twitter

I love tattoos! Unfortunately I don’t have any at the moment but I have hopes for the future to get some work done. An anime/otaku related tattoo is something I have considered. I follow a few tattoo artists on social media who mix in anime with their work. One of my all time favourites is Brando Chiesa who does gorgeous pastel gore art and often mixes that with anime. If I were to get an anime related one I really love the idea of getting Ryuko from Kill la Kill by an artist like Chiesa because she is such a strong and beautiful character who I adore and would look amazing in Cheisa’s style.

Again thank you so very much for 200 followers! It means the world to me to have gotten this far!