For our second full day in Osaka we headed over to Osaka castle. I really wanted to see at least one castle on our visit. We took the train over to the castle and when we arrived and left the station we found out that we could take this teeny tiny little train which would take us from up near the station up towards the entrance of the castle. This little train was an actual lifesaver as it was a boiling hot day and if we had walked over to the castle it would have taken a while and I would have probably died from the heat. Not literally but you get what I mean. I don’t mix well with hot weather so it would have been actual hell for me. The little train was a planet journey which took us around the park which surrounded the castle and it stopped just outside the castle and from there we crossed over the bridge and headed up to the castle. 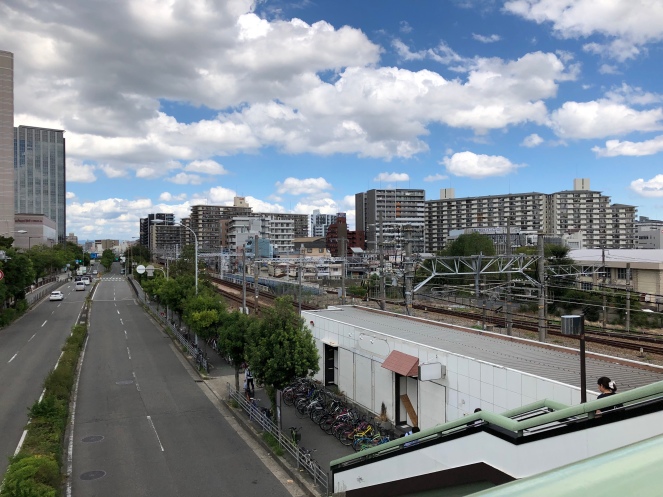 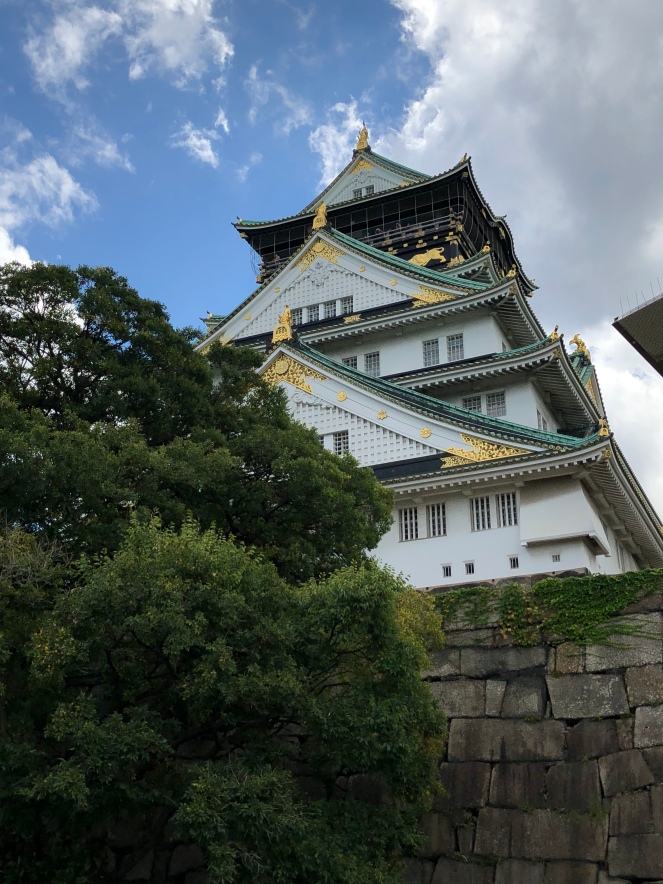 When we finally reached the top where the entrance was we purchased tickets to go inside the castle. You could get combined tickets for other things as well as the castle but as we didn’t know how long we would be we decided to just get castle tickets. The tickets were fairly inexpensive and was about 600 yen each which is about average for these kinds of tourist spots.

The castle wasn’t exactly what I was expecting. I didn’t realise at the time that it was a reconstruction so I thought it was going to be a really old, traditional castle inside where everything had been preserved and looked like how it would have done hundreds of years ago. Instead it was more like a museum inside of a grand looking castle and it was obvious it had been reconstructed. At the top of the castle there was an observation deck which we headed up towards first. The deck went all around the top of the castle as when walking around it I got a 360 degree view of the city of Osaka. I love going up to observation decks in different cities as it always blow my mind to see how vast cities are and Osaka was no exception to this. The views from the deck were phenomenal and it showed just how far the city reached. I thought this was a pretty interesting feature to the castle. 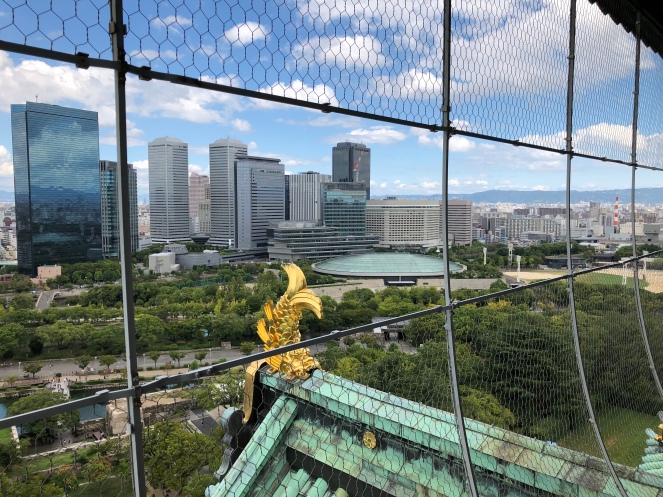 After we finished up on the deck we headed downstairs and walked through the castle making our way down floor by floor. The top floor of the museum displayed a full run down of the founder of the castle which I wasn’t expecting and I learnt so much. I’m not very clued up on Japanese history and had no idea that the castle was built by Toyotomi Hideyoshi. The museum retold his life from being born all the way up until his death. Hideyoshi was raised in a poor family and basically worked his way up to the top. He ended up working with Oda Nobunaga in his clan and by the end of his life had built this great castle and rose to power. When I was reading the different sections about his life I thought at the beginning that he was a pretty cool guy who worked his way up to the top from nothing. Very admirable, right? Well as he got older he turned much more evil and by the end I was just like ‘ok I take back everything I thought about you dude’. The lower floors displayed a lot of artefacts from Hideyoshi’s time including lots of traditional art and official documents to do with important events from his life. There was a good amount of English for me to read and learn from which is always appreciated.

After finishing up in the museum we went to this other large castle like building which was just behind castle. It was quite a grand looking building which was actually just full of souvenir shops and restaurants. We grabbed some fries at this Takoyaki place and wandered around some of the shops to see if there was anything interesting to buy. One of the stores which particularly stood out to me was a ninja themed shop which was fun to browse around. At this point it was starting to get late in the day so we headed back into the centre of Osaka as we knew things like the castle would start closing up as typical tourist attractions often close at five or six.

We headed back up to Den Den town and I wandered around a little more before heading towards Dotonbori which is the area famous for the Glico running man sign. Whilst wandering around this area we noticed that there wasn’t a massive amount of places to shop. Most of the streets we walked down were full of restaurants and pachinko parlours. Many of the restaurants were decorated with gigantic 3D signs and statues above the entrances which were really cool to look at and take photos of. Some of them were really awesome and some of them were just strange. I also turned around at one point along one of the streets and I saw what looked like the grunge just standing in this doorway and my heart almost stopped. 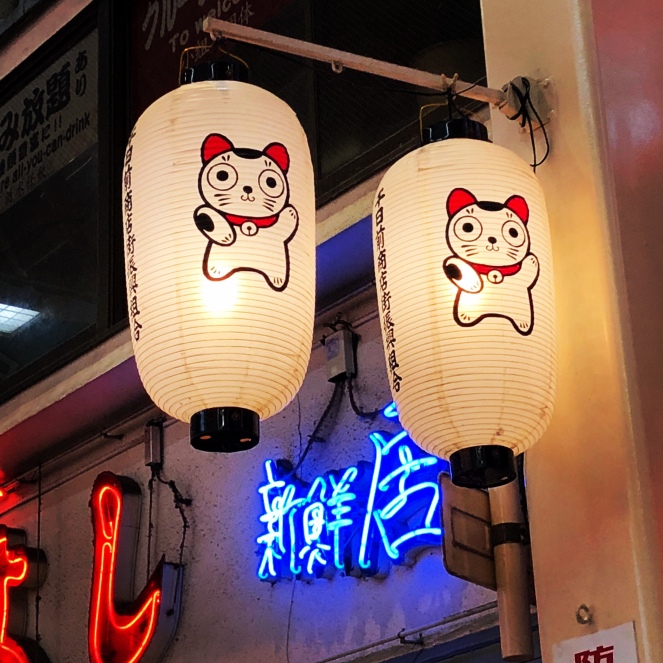 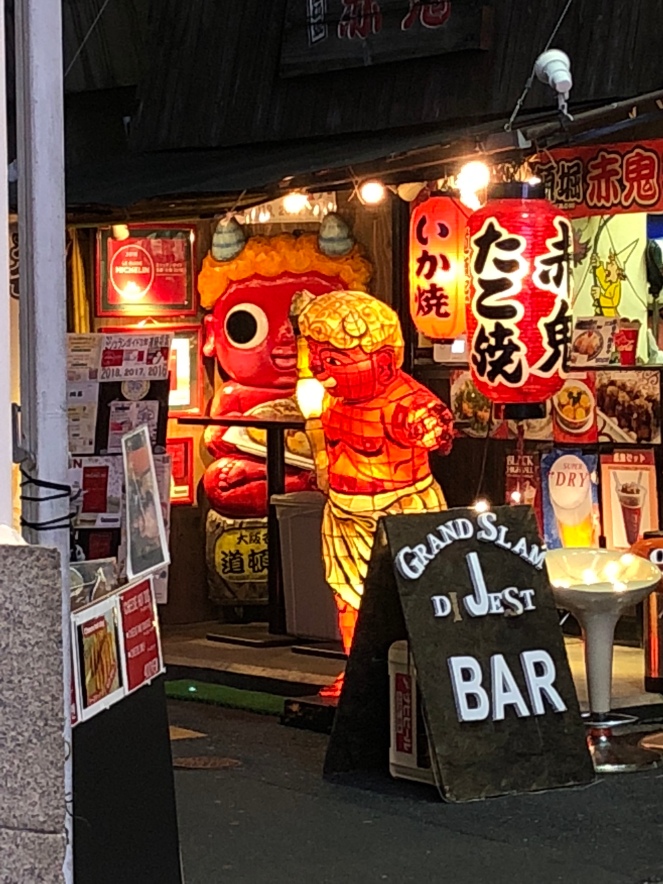 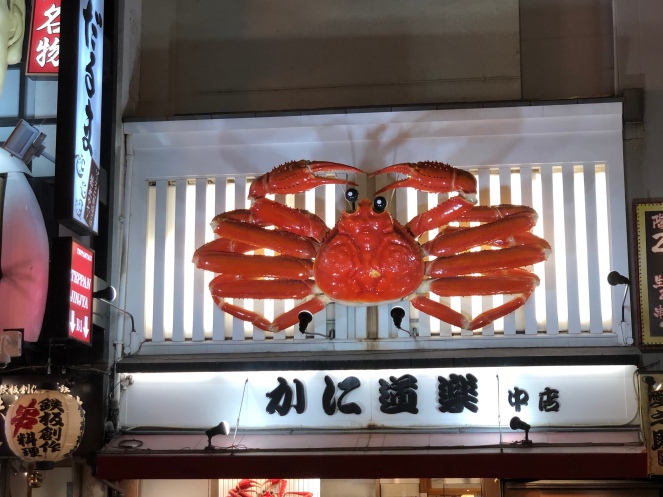 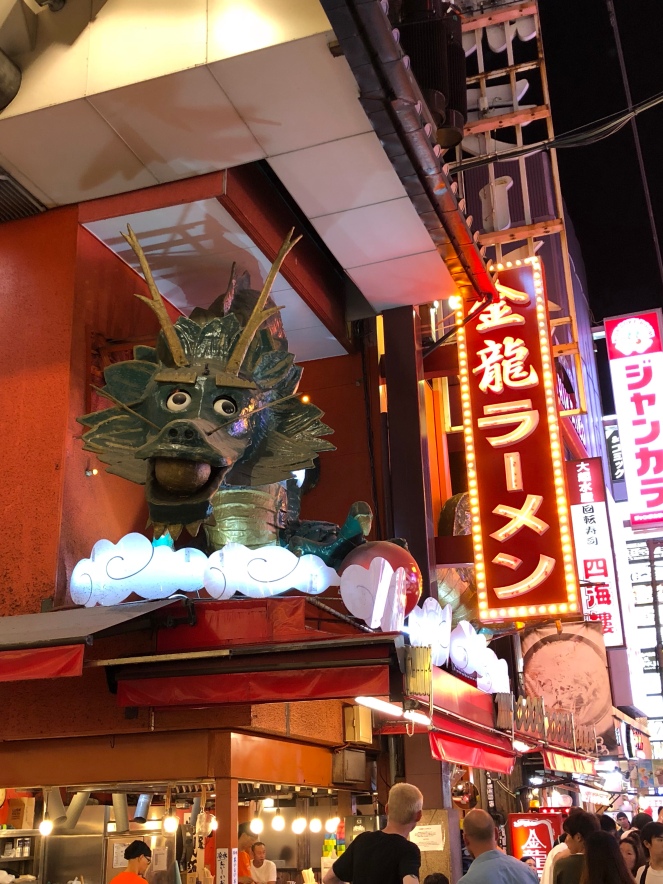 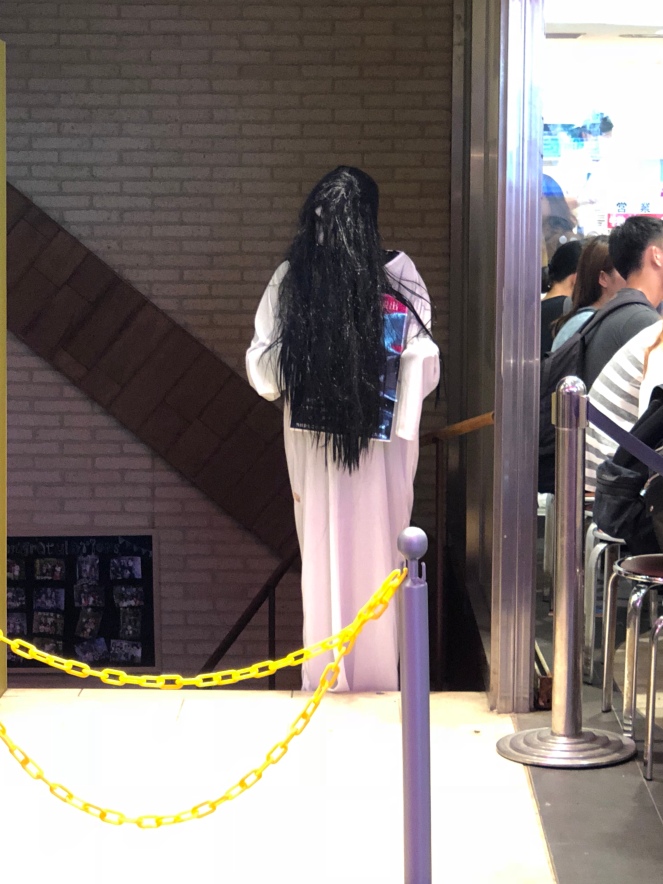 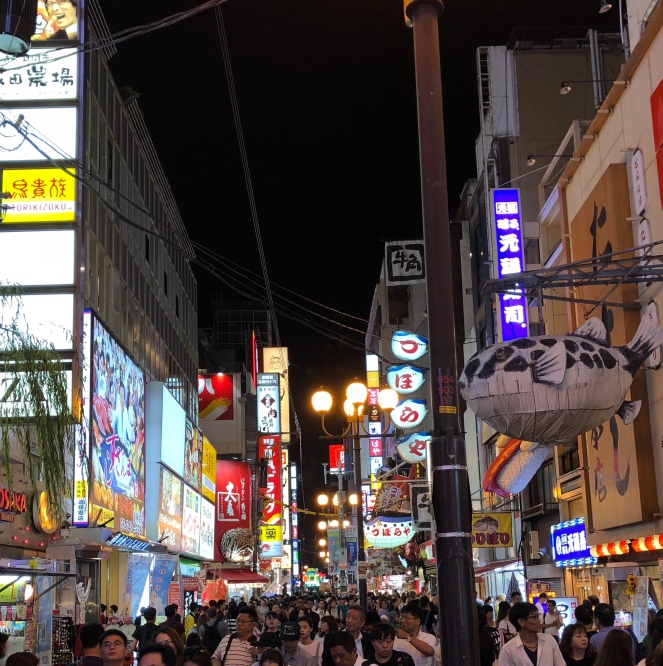 As fun as it was to take all these pictures there wasn’t much else to do other than eat or gamble and we wanted to do neither so we headed home to eat late night snacks and sleep.