Unfortunately this was our last morning in Osaka. This was our first travel day in which we moved to our next part of the trip which was over to Hiroshima. We spent the morning packing everything up before saying goodbye to our sweet little apartment. I was sad to leave Osaka as I really loved the city.

Thankfully the typhoon had passed over Osaka completely and it was actually a nice, bright and sunny day. This was a relief for us as we had to head to the train station and catch the Shinkansen and we were hoping that the trains were back in operation. When we were walking over to the subway station we passed through the neighbourhood we had been staying in and saw that even after a horrible typhoon everything just went back to normal as if it never happened. As someone who is from a country which experiences a very mild, calm climate I can tell you that if this happened in England everything would shut down for at least a week or two, maybe more. Everything comes to a halt in England when there is weather other than rain. But in Japan as it’s more common they just pick everything back up and carry on as they always have. As I walked by I saw people working together to clean up the streets and get rid of all the bits of debris. 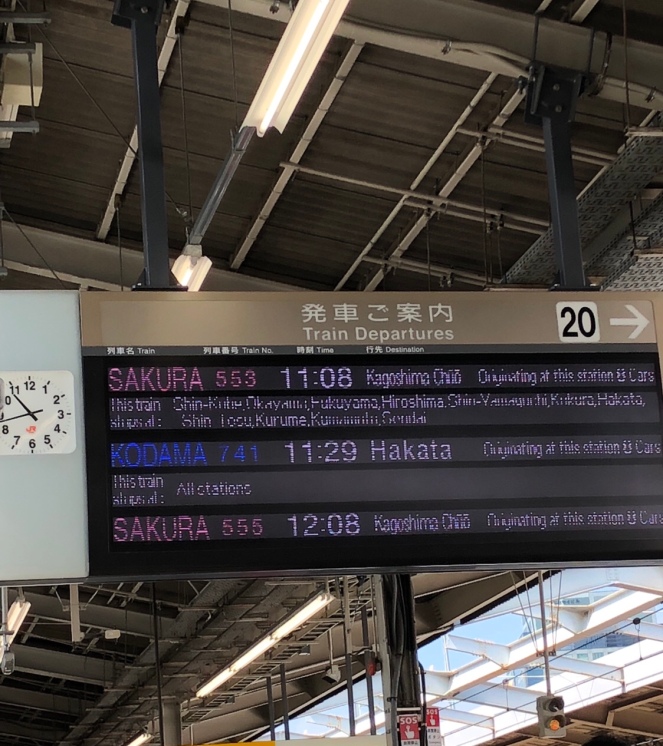   Our trip over to the Shinkansen was my first time having to wear my rucksack on my back. This was a traumatic experience as I have never felt physically sick holding a bag before. When I was standing on the subway train I was praying that it would be over soon as I was in a lot of pain. This new experience taught me that I don’t like having a rucksack and I’m better off just rolling around a suitcase. After we got to the station and I hastily got my bag off my back we hopped on the train and I basically passed out for a couple hours on the journey over. We arrived at Hiroshima and got a taxi over to the hotel and dropped off our bags. The hotel we staying in was nice and clean but nothing very special. It honestly made me miss the apartment as it seemed so boring after such a cute little place. The hotel did however have this adorable Halloween display in the lobby which I just had to take a snap of. They had an adorable koala mascot which I thought was so cute. 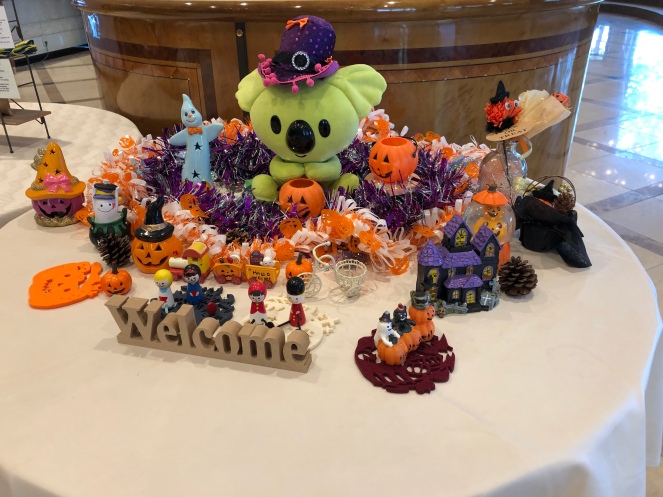 Fortunately our hotel was in a prime location as the Atomic Dome and the city centre were basically on our doorstep. The first thing we had to do when we got there was go get food as I was starving. On travel days I basically don’t eat so I needed sustenance. We ended up eating at McDonalds as it’s quick, easy and reliable no matter where you go. Fun fact I have really bland tastebuds and don’t really like Japanese food. So junk food all the way for me! After eating we wandered around the city centre and I came across Hiroshima’s Jump Shop. I was hyped to go to this store as it’s one of my favourite anime stores in Japan. I visited the one in Tokyo last year and adored it so I was excited to visit one of their stores again this year. Jump as the name suggests is a Shounen Jump themed store based entirely around the famous manga magazine and it’s many series. The outside had a really quirky exterior which I spotted from a mile away. Inside the store holds merchandise for many of the magazines most popular series including One Piece, Gintama, My Hero Academia, Haikyuu, Tokyo Ghoul, Naruto and many more.

After my parents managed to drag me away from the store (just kidding) we headed over to the Atomic Dome which was down near the river. It was a really sunny day and we knew we had a lot to see and do so decided to head down there and see it whilst it was nice outside.

The dome was a haunting and ghostly building to see up close. It’s incredible that the skeleton of the building is still standing with the help of steel bars from preservation projects. When standing there I honestly felt tears welling up and I thought about all the innocent people going about their everyday lives in the building and were then gone in an instant. It was really hard to get my head around the fact that it actually happened especially when seeing the rest of the city which surrounds it and seeing how beautiful and alive everything is. It’s amazing to think that Japan has created such a beautiful city in the past seventy years after such devastation. I think it’s so important to have these ruins up for everyone to see as it serves as an important reminder of what happened and it should never be forgotten. 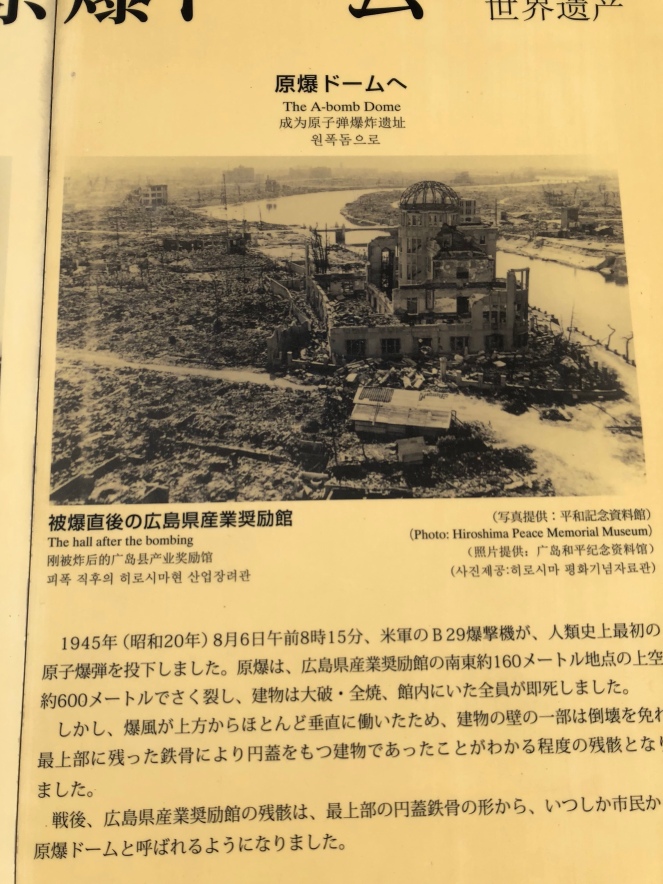 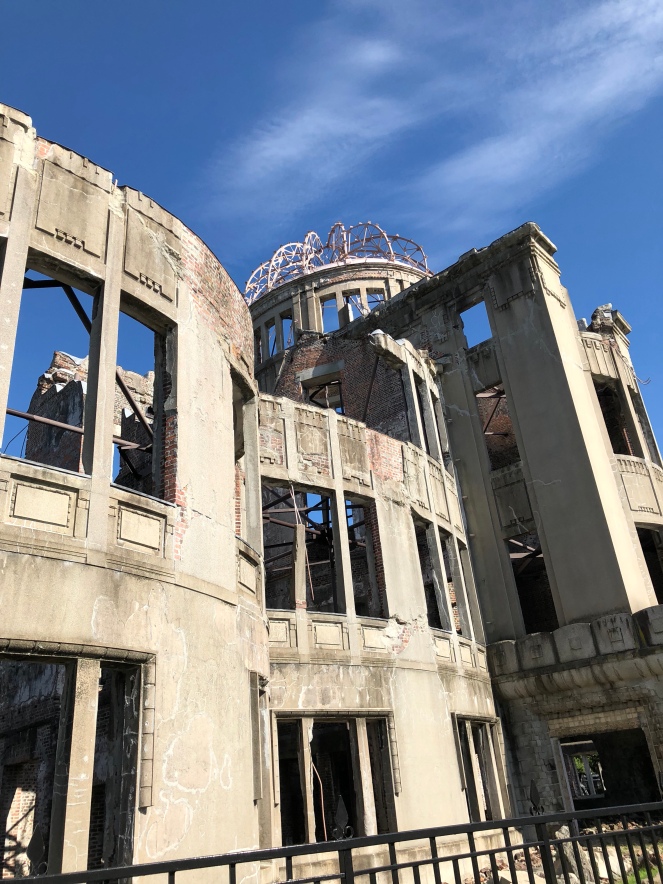  After taking in the haunting skeleton of the dome we headed back into the centre and I went and shopped myself silly in the Jump Store. That store has so much amazing merchandise. I cannot recommend this store enough if you are a fan of any popular Shounen Jump series. They have a store in Hiroshima, Tokyo and I’m assuming a few other cities in Japan. I was one of those annoying customers who was there until it closed and basically got kicked out because they wanted to shut up shop. In my defence though we were told it closed like two hours later than it actually did. We then just wandered around the rest of the city centre and window shopped until everything closed up before heading back home again.

2 thoughts on “Nerdy Travels: The Atomic Dome in Hiroshima”