The original plan for this day was to head over towards Okunoshima which is a small island off of Hiroshima. The island is famous for its little fury inhabitants of bunny rabbits. The island was also used in World War Two as a place to hold a poison gas factory but has now been turned into a bunny filled tourist attraction. I really wanted to visit this island because who doesn’t want to be surrounded by bunnies all day? Due to bad weather we decided against going which was the wisest thing we could have done as the weather worsened throughout the day.

Instead we decided to stay local to our hotel and have a more relaxed day. We took this opportunity to visit the Hiroshima Peace Memorial Museum as we didn’t have chance to visit it when we saw the A-Dome on the first day. The museum was across the river from the dome and I was pleased that we were able to see it before we left the city.

The main building of the museum was closed for renovation and earthquake proofing work but there was a building to the side of it which was open and it had lots to see about the incident. When I first entered the building I noticed a clock which was a peace counter counting the days of peace since the bomb dropped as well as the number of days since the last nuclear test. The main goal of the museum is to teach people and help eradicate the use of nuclear weapons. 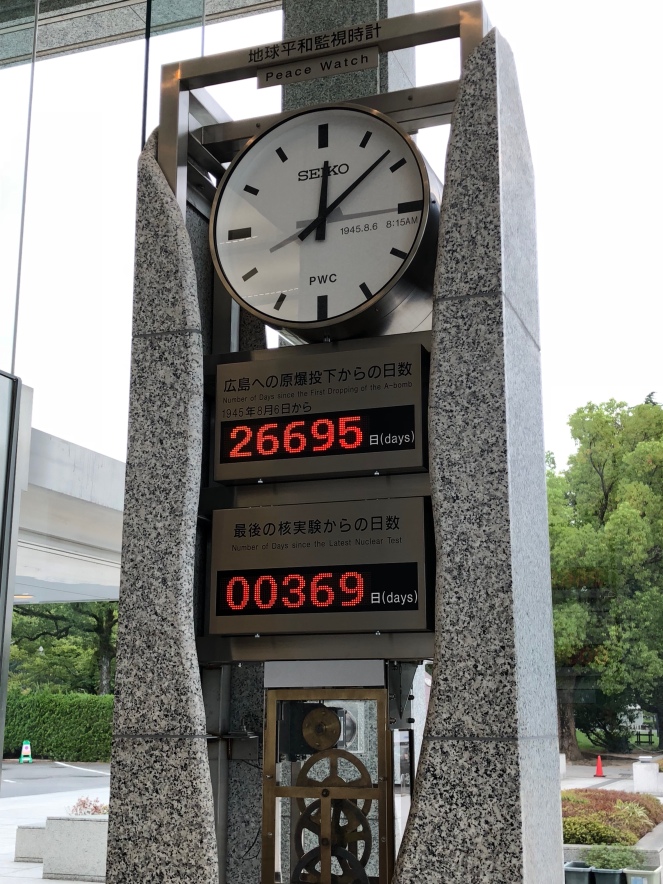 I think it was around 500 yen each to get into the main exhibition and we also decided to opt for audio English guide on top of that. The exhibition took a good couple of hours to go through as there is so much information on everything that happened. When first entering the exhibit there was a 3D recreation of Hiroshima before, during and after the bomb hit showing just how far the blast reached as it went all the way into the mountains. Seeing this 3D recreation blew my mind. The museum then goes through everything that happened before, during and after the bomb went off. It went into details about the planning of the bomb, the inner workings of the bomb, as well as the aftermath and the effect it had on Japan and it’s people. The exhibit explained the thinking behind the countries who developed it, the effects of the bond like radiation, heat and the blast, it showed developement of nuclear weapons throughout the world and how it had changed since the 1940’s. Finally the last part of the museum went on to show the victims and displayed the utter devastation of what the bomb really did. Towards the end there were some graphic images of the victims as well as accounts from the survivors. Artefacts from the disaster were also on display at the very end which were truly something else to behold. Glass cases held bottles which had melted and fused together with the heat, a watch which had stopped exactly at 8:15 AM on the 6th August 1945 as well as pieces of clothing from children. Although the museum isn’t that happiest of places to go to it is very much worth a visit especially because it’s a big part of Hiroshima’s history. I cannot recommend the museum enough and I think it’s so important that people truly know what nuclear weapons can do.

After the museum we headed into the city centre. Our first stop was Tully’s Coffee to eat more pancakes. Whilst eating pancakes my parents and I had deep discussions about what we had just absorbed and the war in general. I love having long, deep chats about important topics. It makes me feel kind of smart.

The rest of the day was spent shopping in the centre. I wandered around the local Animate store for a while and checked out some doujinshi. I also went to Book-Off and grabbed myself a baseball shirt as merchandise for Hiroshima’s baseball team the Toyo Carps was everywhere. It was clear that Hiroshima is proud of their baseball team. I’m not a sports person but I have always found baseball kind of cool and I love the uniforms they wear. I thought it would be cool to get a Hiroshima exclusive souvenir before we left.