Happy Sugar Life follows Satou Matsuzaka who finds and falls in love with a girl named Shio. Her life which is full of bitterness becomes much sweeter when she is around Shio. Satou will do anything and everything in her power to keep her and Shio’s life together even if that means murder and deceit.

I’m not sure where to begin with this review. The first thoughts that spring to mind when thinking about Happy Sugar Life is that it is a unnerving, gut wrenching anime in which every episode left me hungry for more. Upon reviewing this series I feel so many mixed emotions about it.

The yandere element of Happy Sugar Life was interesting. Whenever I’ve seen the yandere trope used in the past it’s always used for a side character or life interest but this time it was used for Satou, the main character. This was a interesting twist on the infamous trope. Satou’s tendencies seem to differ from most other yandere types as many others go after their beloved if needed but Satou never takes such actions and only lashes out at others when others get in her and Shio’s way. When first hearing about the overall concept I assumed Shio would receive some of the yandere tendencies which made me apprehensive about the series but thankfully I was wrong.

I’m not someone who gets rattled by anime even when it gets dark. I have a strong stomach and it takes a lot for something to really unnerve me whilst watching. This series kept me on the edge of my seat and really played with my nerves. The constant string of grim themes such as domestic and child abuse, sexual abuse and sexual predators kept me on edge constantly. Dark themes which are real world problems are far more disturbing compared to fictional creatures which live under your bed or suck your blood. One of the most noticeable parts of Happy Sugar Life was how consistently it used these themes. These problems weren’t used once for shock factor and then brushed aside, instead they were a constant which drilled in the true nature of these problems. The themes were used with seemingly seemly normal characters who, when unmasked showed the true monsters that they are. That in itself was chilling making it more realistic. Watching characters such as Satou’s teacher and Mitsuboshi switch their personalities when alone or in certain situations where they can truly be themselves was fascinating. Many of the facial expressions made me shudder. In fact, not only the characters but the series as a whole was one big deception which lures viewers in before showing it’s true face. 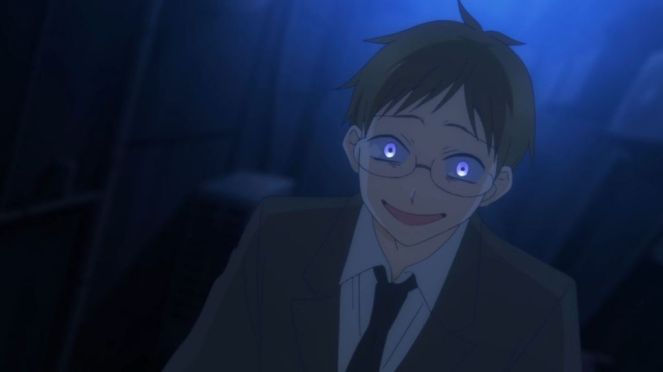 The concept of sweetness, sugar and bitterness was an interesting way to express how Satou was feeling. She uses the concept of sweetness and bitterness to differentiate what she is feeling at the time. The world around her is bitter stemming from her upbringing with her abused love obsessed aunt. The only time she feels happy and the sugary sweetness of life is when she is with Shio. Instead of using happiness or fear or worry she uses such simple concepts which gets across how she has been raised and her thought process brilliantly.

Satou and Shio’s relationship was confusing and I was never sure how to feel about it. On the surface it seemed sweet and innocent. Satou does everything to look after and protect Shio and the relationship never seemed that of a sexual or even romantic one. It almost seemed sisterly as if they were just a family. Having said that they make marriage vows to each other so the relationship still eludes me. 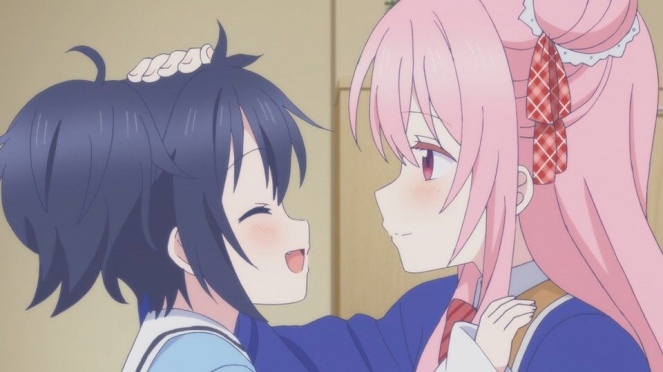 At a first glance their relationship seems loving and almost normal but as episodes go by it becomes increasingly more evident that Shio is a prisoner in the apartment she lives in. She’s locked up but doesn’t even realise it and what she sees as a safe space is actually a dark and dangerous place to live. This element was well done as she is so oblivious but as a viewer you worry for her safety and it makes the situation that much creepier.

Although the majority of the characters were basically unlikable they were still excellent characters in the anime. Although Satou did some unspeakable things to keep her relationship alive and well I think she is my favourite yandere character I have come across so far. Minus her yandere tendencies she is a likeable character whereas in the past I usually find yandere characters annoying and unlikable. Shio was hands down my favourite character and I wanted to give her the biggest, warmest hug and tell her everything would be ok. She was so sweet and precious and just needed lots of love and protection.

I am so much more impressed with this anime than I first thought I would be. I highly recommend especially for the Halloween season. Although it’s not scary in the traditional sense it has a darkness which is perfect for psychological horror fans.

You can stream Happy Sugar Life for yourself on Amazon Prime UK!