The first full day in Fujiyoshida started out incredibly. I was awoken by my dad at five in the morning who had gotten up and looked outside the bedroom window. We were met with a view of a perfectly clear view of Mount Fuji. I scrambled out of futon, grabbed my phone and took a few shots of the mountain in its early morning glory. 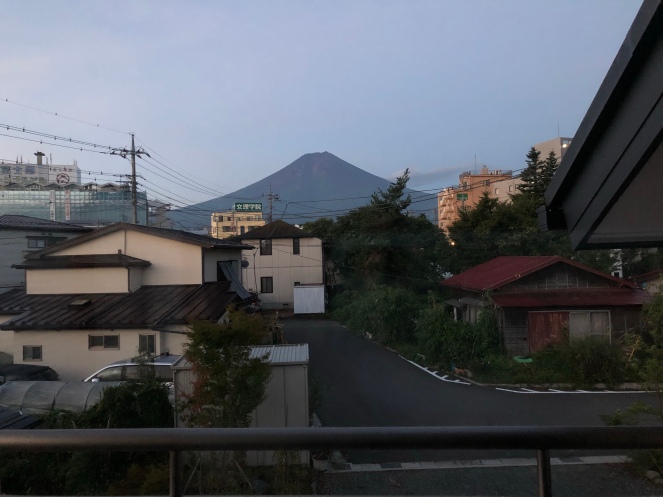 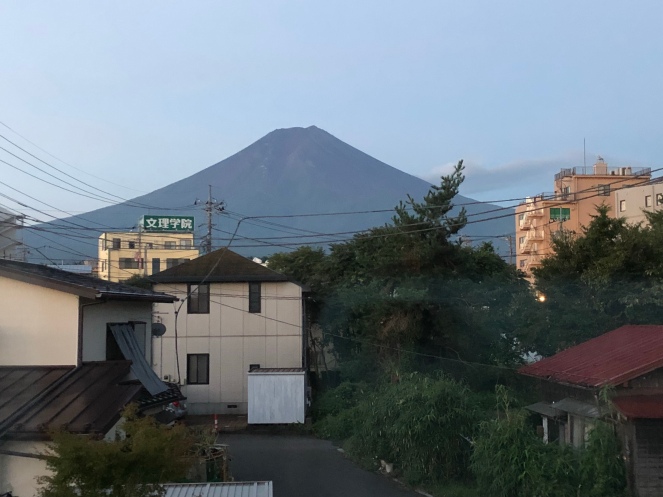 I then proceeded to get back into my futon and go back to sleep because it was 5AM and I’m not a morning person. I was in a zombie like state but even still I was so happy to have been able to see such an incredible sight especially from my bedroom window. I feel extremely lucky to have had such an opportunity to see something so famous up close. When I got up properly at around 7AM I looked outside the window again and I still had a pretty incredible view of Fuji as it was beginning to cloud over. 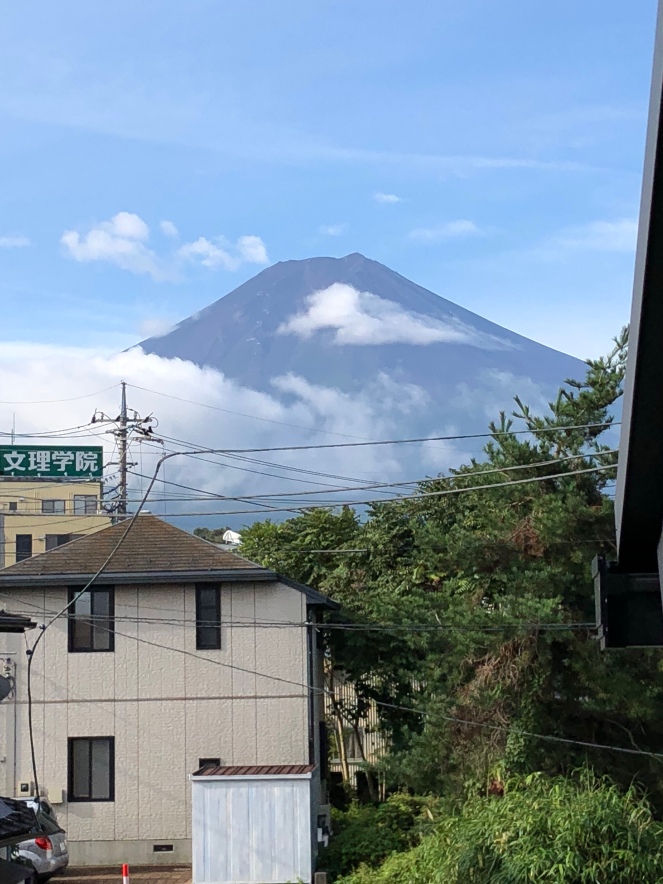 Not long after I had woken up Fuji-san disappeared once again for the rest of the day. If you ever want to get a clear view of Fuji then I recommend getting up early in the morning when it’s clear. For most of our stay in Fujiyoshida the weather was very cloudy and so we only had a few small chances to see the mountain. At one point I referred to Mount Fuji as a ‘shy boi’ because of how it kept evading everyones eye and enjoyed hiding behind the clouds.

The first stop of the day was to head over to Fujikawaguchiko. We hopped on the local subway train to Kawaguchiko station. I wandered into the shop in the station and came across Yuru Camp themed cookies. This made me smile and I was so happy to see something Yuru Camp themed up in this area.

From the station we got the green line bus from there which took a route all around the area.

The first stop was a bat cave which was located along the green line bus. We paid a couple hundred yen each for entrance to the cave and headed in. We were given hard hats and we made our way into part of the forest to get to the cave. It was pretty quiet around the area but there was a few Japanese tourists roaming around and exploring the area. As we visited the cave in the morning we were warned that since the bats are nocturnal it was unlikely that we would actually see any flying around. Bats or not I love my time visiting the cave. I’d never been in a cave before so this was a new experience for me. There was a gate and some steps at the entrance and as I descended downwards into the cave I felt like I was walking into a first player horror game. But in a good way. I loved the spooky atmosphere.

Little lights littered the cave to lead the way and water dripped down from the ceiling. We took what was called the basic course and wandered around the cave until it led us back to the entrance. It was dark and very slippy and not for who don’t enjoy small spaces. The exit was this tiny little hole which was a little unnerving but I got through it fine. Although I did wack my head trying to get through it so thank the lord for hard hats. After finishing up at the cave we wandered back through the forest to the main car parking area. We hopped back on the bus and headed towards the lava cave. Unfortunately when we arrived at the stop we spent about twenty minutes wandering through the forest to find the cave bit we had no such luck. We gave up, hopped back on the bus and headed over to the  Yamanashi gem museum. I wanted to get over to this museum as my mum adores gems and anything to do with jewellery and gemstones. We were the only people in the museum when we arrived and had the whole exhibition to ourselves which was nice. We paid about 600 yen each for tickets into the exhibit but I think it was well worth the money. The exhibition was laid out beautifully in a dark room with lots of spotlights highlighting all of the gems. As my mum is practically an expert on the subject I basically had my own private tour guide to tell me all sorts of information on all the different gems. I’m not kidding when I say I learnt so much from my mum during our time here. 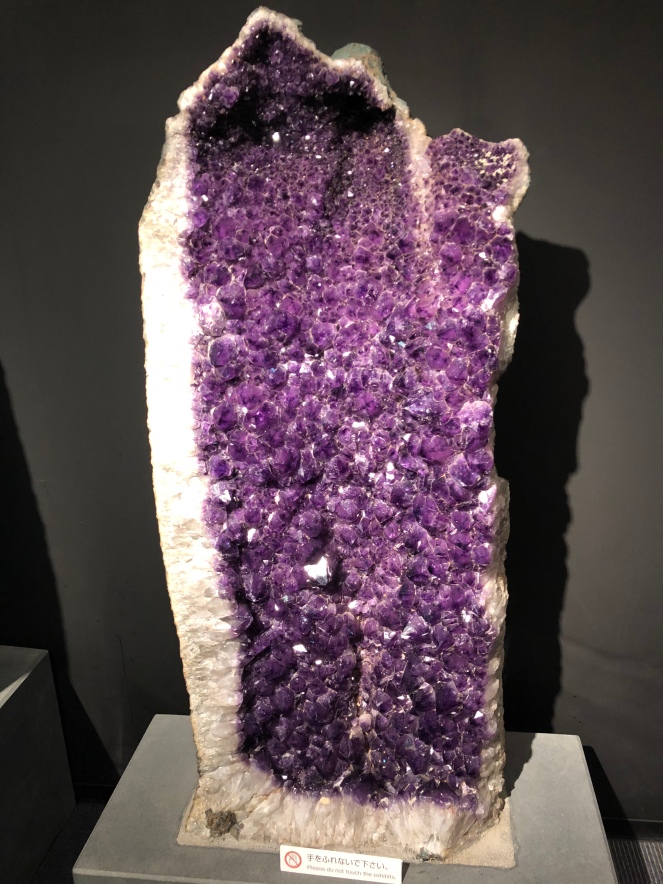 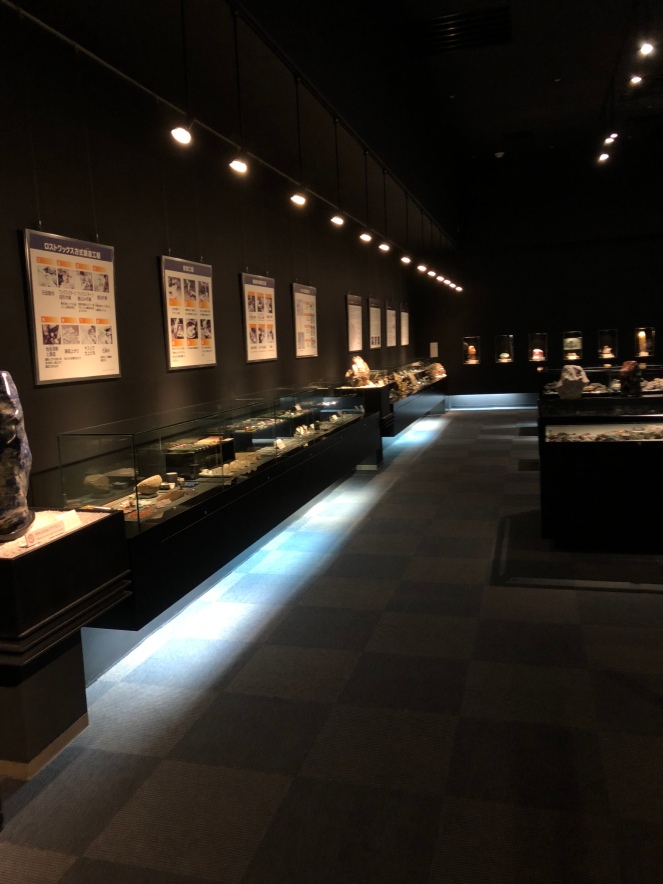 After the gem museum we headed down to Fuji-Q Highland which is an amusement park. The park has a few options in terms of tickets. It can be accessed for free and then you can pay to ride on the attractions and you can also pay for a ticket which includes access to rides. We just got to free ticket and spent the evening wandering around the park. On arrival I found out that Fuji-Q Highland was doing a collaboration with Love Live Sunshine. The park had exclusive merchandise, cut outs and decorations of the girls around the parks and even voice over announcements from the characters. Even one of the trains that went through the park was fully decked out Love Live style. 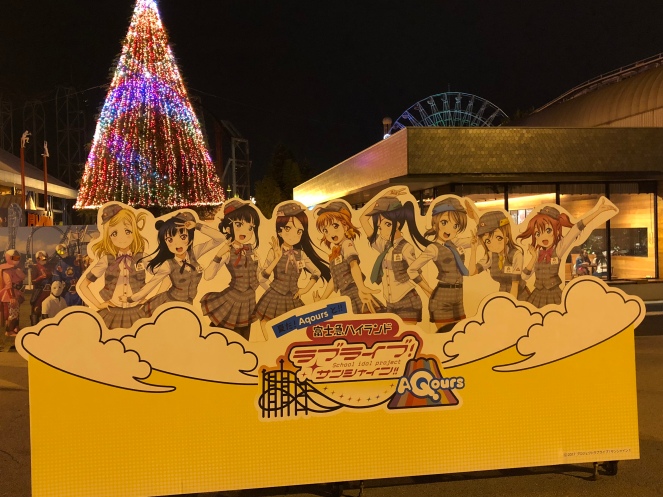 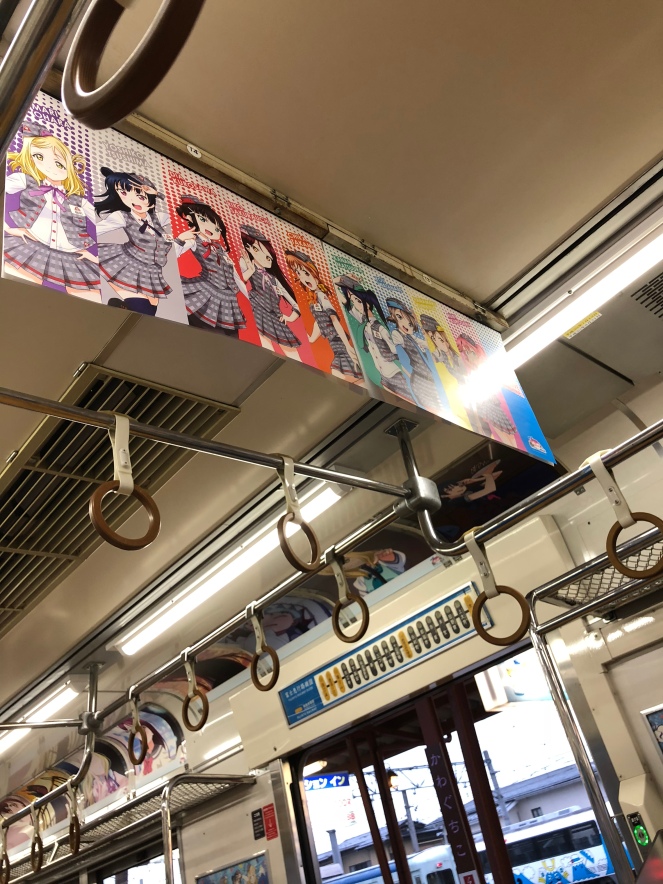 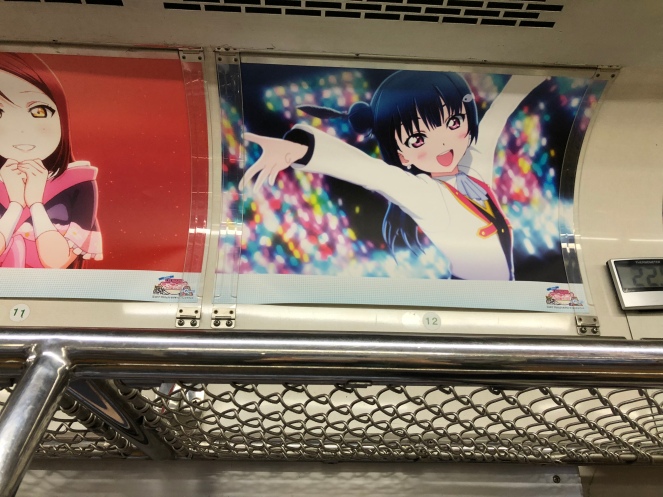 We stopped in the little food court area and came across some themed food. They had pizza shaped like Mount Fuji. Fuji pizza is a first for me.

We wandered around the park until it got dark and it was just a pleasant place to spend an evening. I didn’t go on any rides but it was still fun to explore either way. As it got dark all the lights turned on making the park look a hundred times more magical.

9 thoughts on “Nerdy Travels: Fuji at Five AM”