Yona is a princess born into the peaceful kingdom of Kouka. Her father who lived for keeping a peaceful kingdom is murdered in cold blood by the love of her life. Yona is forced to flee her royal life and go into hiding away from the danger of meeting the same fate her father did. Yona and her bodyguard Son Hak venture out into the kingdom to track down the four dragon warriors to help her in her journey.

Yona of the Dawn had been on my watch list for quite some time. From visuals alone it seemed like something I would be interested in and recently I finally sat down to give it a go.

From the moment I started the series I fell in love with it. Yona of the Dawn has stunning visuals. The eyes of the characters, Yona in particular are breathtakingly detailed and overall the colour palette and character designs just kept me coming back for more. Not only were characters like Yona, Hak and the dragon warriors designed beautifully but they were likeable. Often, with female protagonists in particular they can be a bit meek and what I consider pretty pathetic in terms of character. They are usually boring, bland and just there to fill the spot of the main character. Yona, although a princess was pretty badass. Not only did she have a feminine side which was caring but she had strong determination and went out of her way to make herself stronger and less of a damsel in distress type. There seemed so much more to her than a helpless princess which I appreciated greatly as badass women are the best kind in my book. Hak and Ki-ja were particularly favourites for me. I adored Hak’s love and protectiveness over Yona as this wasn’t just a part of his duty as a bodyguard to protect her but also his love for her. Ki-ja, in my opinion was the best of the four dragon warriors. This could be due to the fact that as a viewer I spent the most time getting to know him than any of the other dragons. His protectiveness and admiration for Yona was also amazing and I especially loved his and Hak’s rivalry. 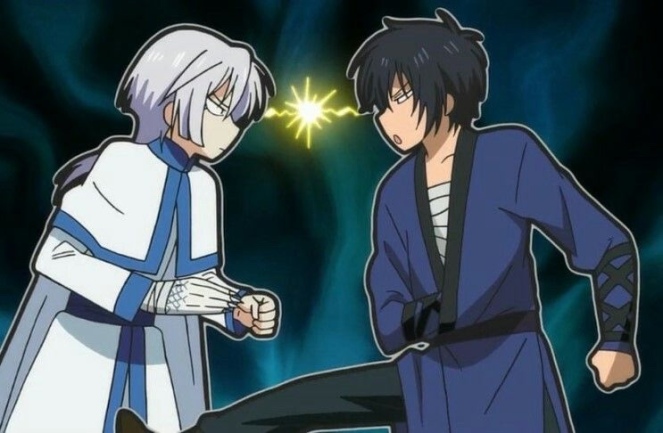 I love a good rivalry!

The overall progression of the story was something I found troubling whilst watching. As the ending neared I realised it was going to be one of those series that ends with no real resolution to the overall story and the anime leaves it there to pick up the rest later in hopes of getting another season. Unfortunately it doesn’t seem that Yona of the Dawn will receive another season which is such a shame.

When you realise there is no more episodes…

My other gripe with this series was the opening sequence. Whilst both opening songs and animation were beautifully done it was also pretty deceiving. The opening showcases Yona, Hak and the four dragons in a reasonable amount of detail and screen time. However, I found this to be frustrating as the first ten episodes of the anime is solely revolved around Yona, Hak and her battle against Su-won. The four dragons don’t even get a look in until right at the end of season one and then it only introduces one of them. As time went by I realised that the dragons weren’t going to get a massive amount of screen time as the opening made them out to have. They seemed like such an essential part of the series but I felt I hardly got to know them. The yellow dragon in particular didn’t show up until the very last episode and it just made me wonder what exactly the point of doing that was. The dragon warriors should have either been introduced earlier on in the story or the opening should have truly matched the anime as it progressed.

You deceived me opening sequence!!!

I was honestly so sad to see this series end. I would be all up for this being a long running series instead of just 24 episodes. I am hopeful that one day Yona of the Dawn will receive another season but for now I’ll have to be happy with what I’ve got. Yona was a beautifully, badass adventure series and I cannot recommend it enough.

7 thoughts on “A Beautiful Adventure (Yona of the Dawn Review)”