Fushimi Inari Shrine has got to be one of the most famous places to visit in Japan. The shrine is the head shrine of the god known as Inari and is known for it’s famous trail of 1000 tori gates which lead up to many smaller shrines up the main mountain. I knew before even booking our first trip that we had to visit this shrine as it’s a must. We visited the shrine during our time in Kyoto as it was a couple of train rides away from the city.

Fushimi Inari is a full day out. The shrine and everything around it really can take up most of your day and I throughly enjoyed my time there. When we arrived and exited the train station we were immediately met with a tori gate. This told us we were heading in the right direction.

We headed over towards a main area on the shrine where a large temple like structure stood as well as tori gates and many stone statues of foxes. 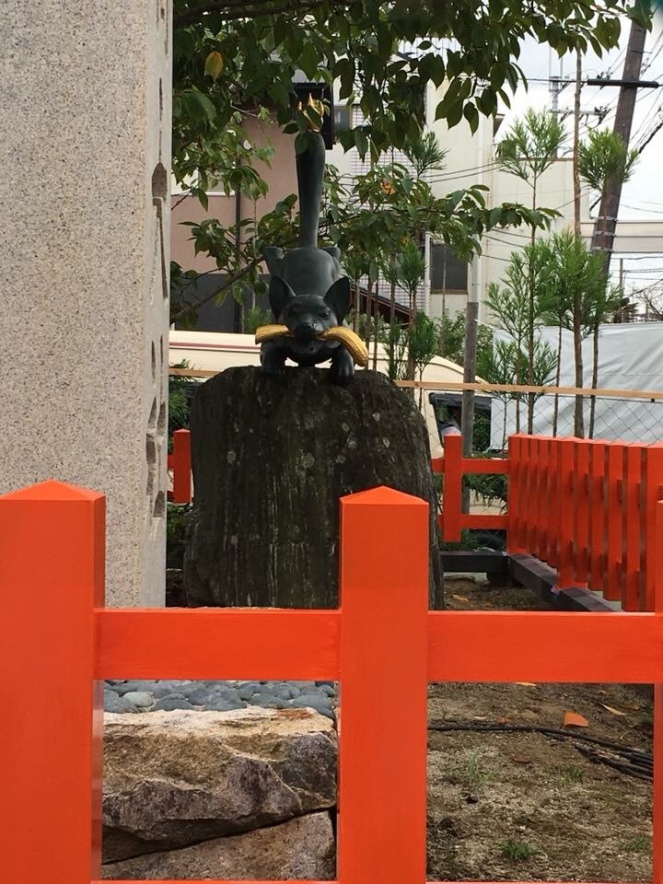 We decided to head up the main mountain where the thousand tori gates are scattered. It takes about two hours to complete the circuit of the trail. The trail goes upwards as it is on a mountain and many stairs have to be climbed to make your way around. SO. MANY. STAIRS. 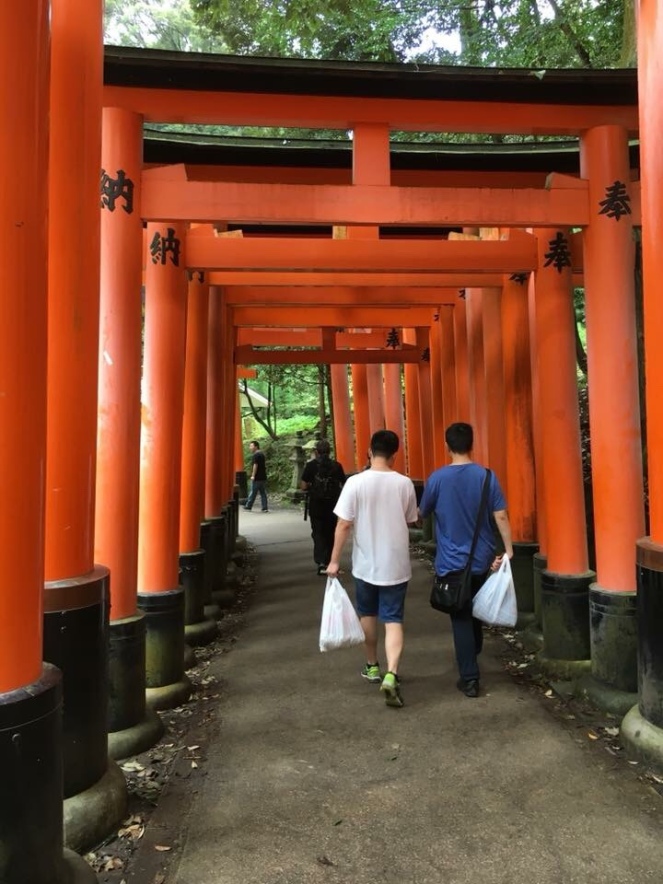 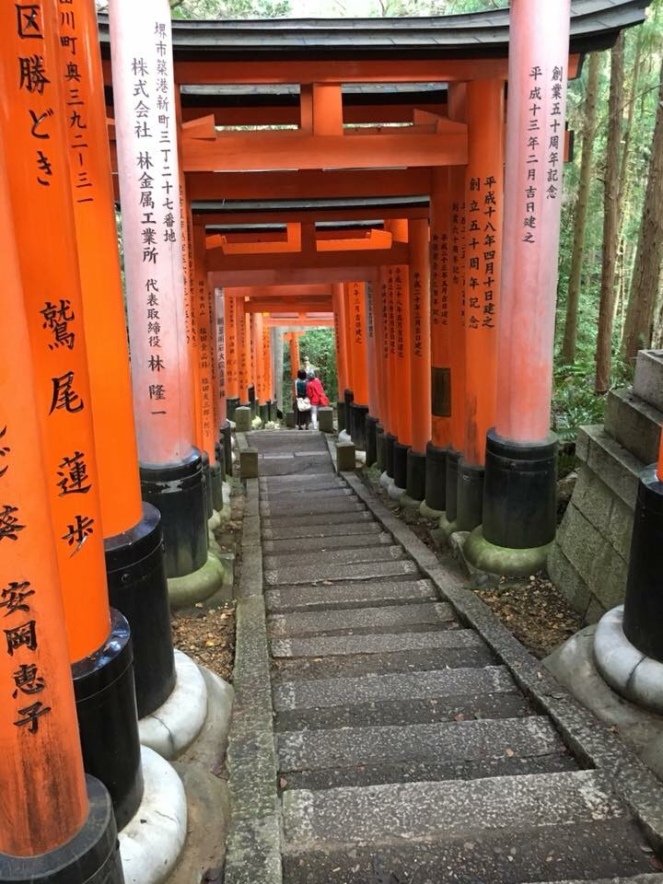 As someone who really doesn’t exercise this was a tiring but also fulfilling trip. The gates were a beautiful part of the trail and they seemed to stretch on and on forever. Many of the gates were older and faded and others look freshly painted and many were covered with script which had some significance but I don’t know what.

There are points throughout the trail which have signs displaying how far up you are and there are also a few rest stops which have vending machines, small shops and tea houses and benches for visitors to take some time to rest, eat and drink. At one stop there was a fantastic view over the city of Kyoto. 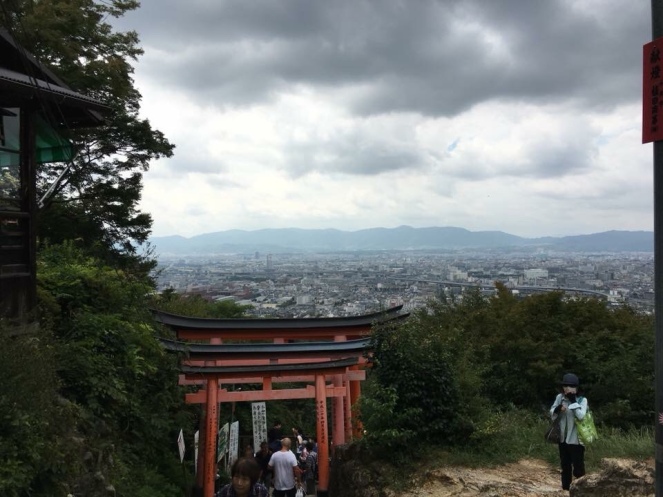 I cannot remember how long it took to climb up to the summit but we made it and I even got photographic evidence of my achievement.

As well as the larger tori gates there were often little clusters of smaller ones which were also accompanied by small sets of stairs and stone statues or foxes and dogs. We also came across little water fountains and we saw that many statues often wearing red bibs. There were also areas where you could buy and light candles which is something very common in Shintō shrines. 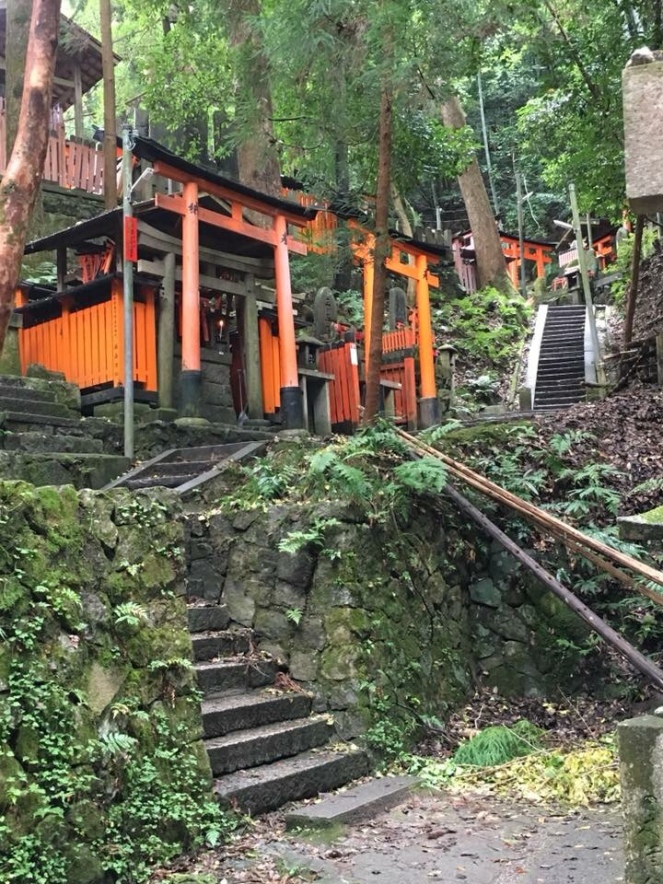 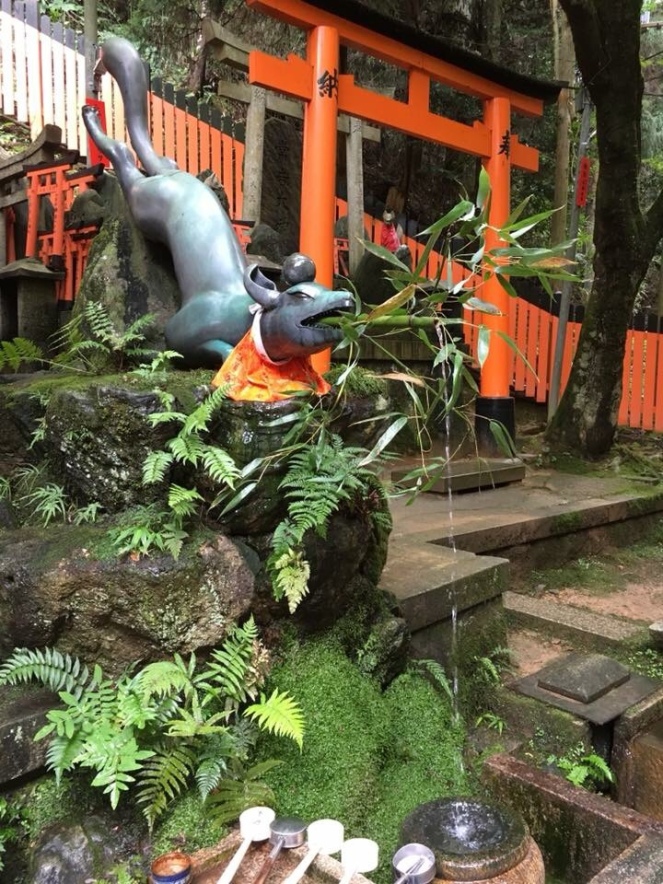 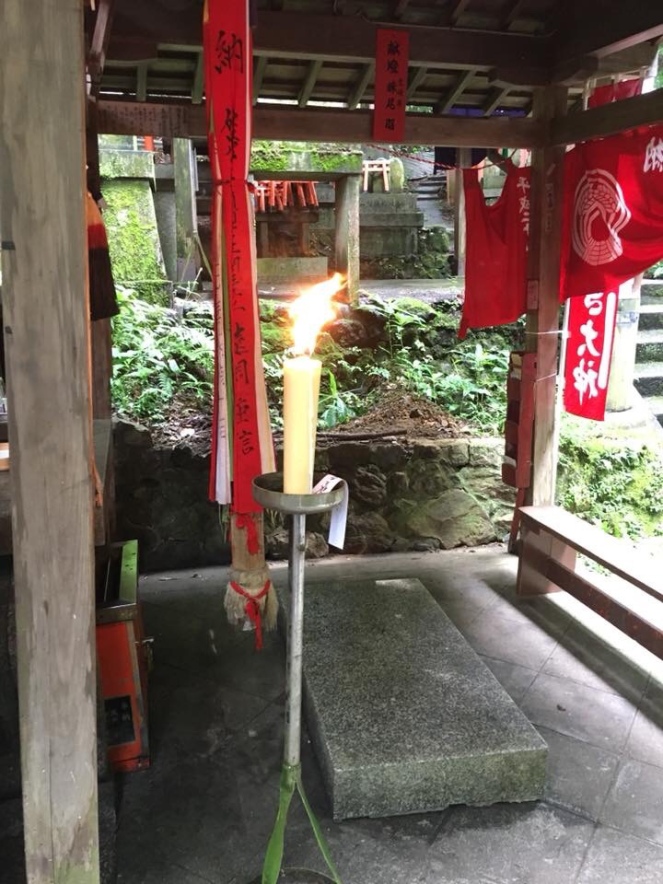 When we headed down from the summit it became a hundred times easier to walk. I found it more relaxing as I wasn’t continually out of breath and I could take in the scenery of the shrines and forest around me much more. 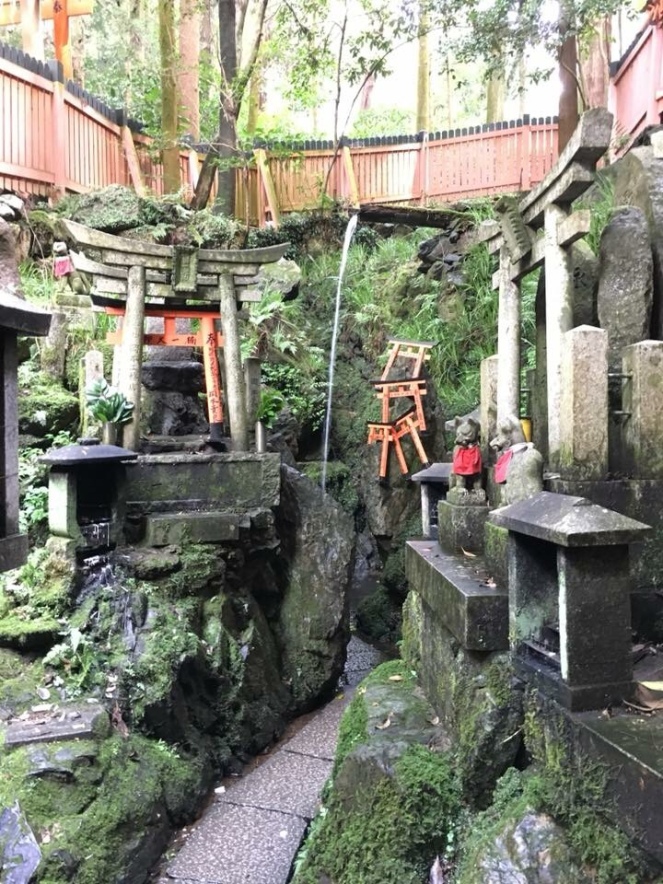 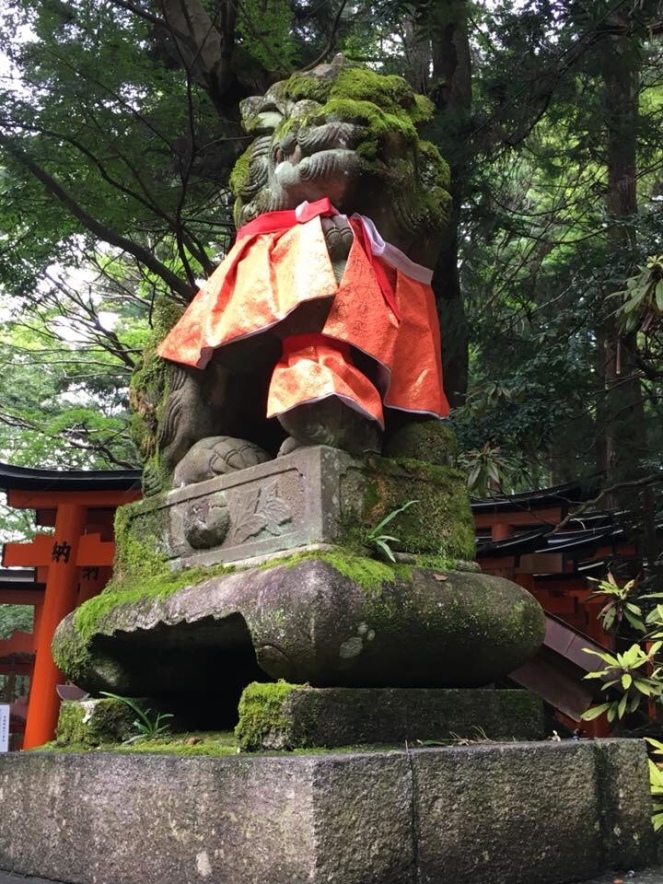 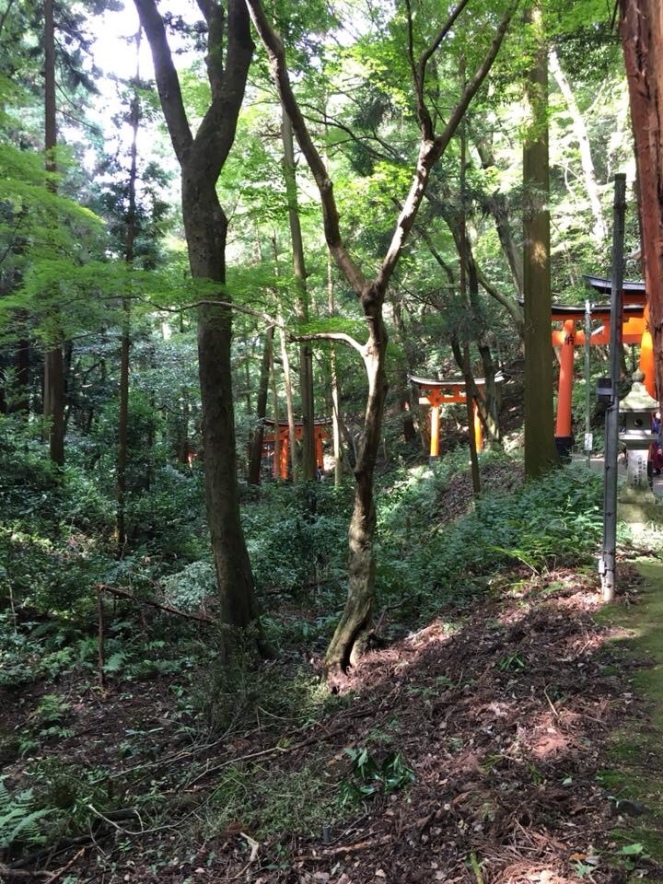 As we reached the bottom we came across a few cats who were lazing around the area. They were super chilled out and were just happy to lie down and be petted by tourists. Cue the cute cat photos! 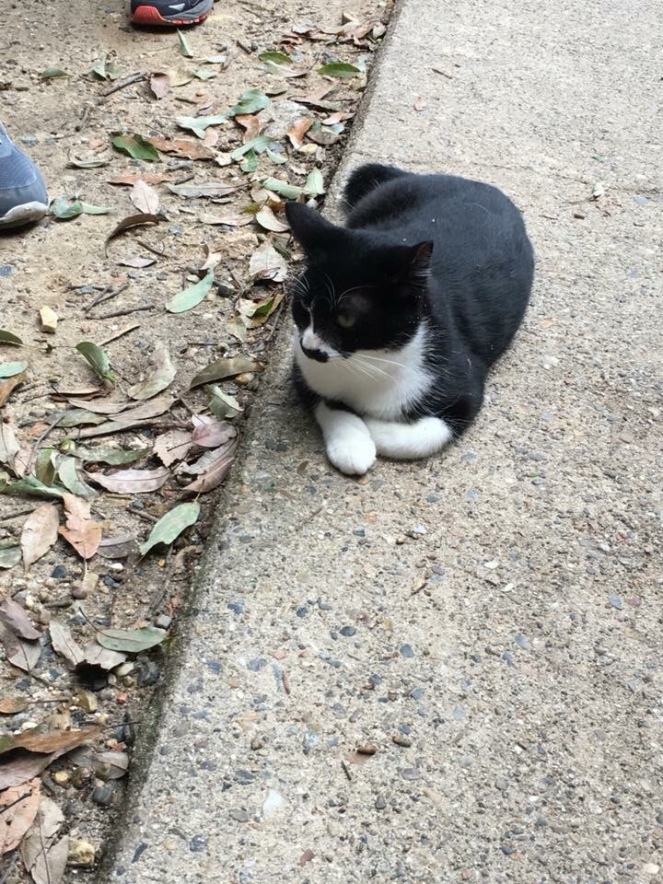 I cannot recommend visiting this shrine enough. It’s a beautiful and relaxing day out and is a perfect opportunity to take in some of the traditional side of Japan.