Saijou Takato is an acting veteran with his career spanning over twenty years. For the past five years he has held the title of sexiest man of the year which has now been snatched away from him by an up and coming actor by the name of Azumaya Junta. Little does Takato know that Junta has fallen head over heels for him and they are about to embark an a romantic scandal.

The key visual on Crunchyroll along with the very long winded but extremely intriguing title is what drew me into watching this series. I had a vague idea of what I was getting myself into but I don’t think I knew the true extent of what it would be like.

Now, I am a very inexperienced viewer when it comes to the shounen-ai genre. The genre has always been the “I cannot deal with yaoi but this is alright with me” kind of thing. It’s a weird grey area and it’s something I can both cope with watching and, well, enjoy. I guess it’s a bit of a guilty pleasure when it comes to anime genres.

I have to say that this anime was very enjoyable. It is extremely problematic but what shounen-ai shows aren’t. The main problem lies in the main point of the anime which is Takato and Junta’s romantic relationship. Takato is an extremely cool, calm and collected character who is highly respected in the acting industry. Junta is a sweet, bright eyed young actor who has an angelic like quality to him. However behind closed doors the two of them act pretty different. Junta’s dominant side which he uses to basically overpower Takato really contrasts with his angel like face and personality. It took me by surprise at first as he seems like a real sweetheart but he is actually an insatiable, sex obsessed perv who constantly wants his way with Takato.

Takato, of course isn’t much better when it comes to their feelings and actions towards one another. He is a real tsundere at heart as he says no and constantly acts like he doesn’t want things when he clearly does. As much as I liked Takato it was annoying to see him complain and be disgruntled all the time with Junta but would soon change his tune and panic when Junta stopped giving him attention. 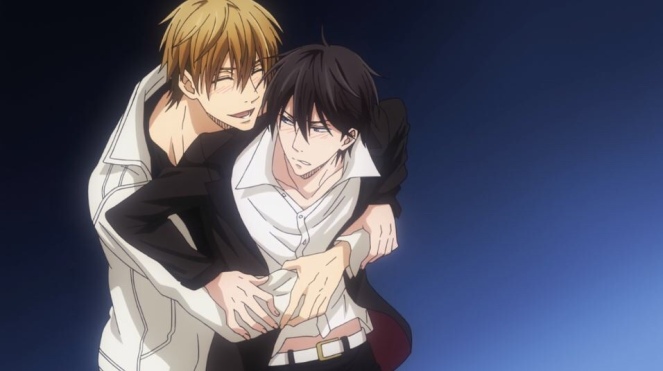 Takato and Junta’s relationship did grow over time. I did often wonder at the start of the series if Junta had a hidden motive or something and wanted to just use Takato. This was proven to not be the case and their relationship did blossom over time as the two came to understand and get to know one another. This genre has a pattern of having characters force themselves onto the ones they like which is extremely unhealthy and I didn’t like the fact that Junta was so forceful with what he wanted. Whilst it became increasingly more noticeable that Takato does want to be with Junta it was such an unhealthy way to go about things. Their relationship could have been much more sweeter if it hadn’t been so forceful on Junta’s end.

I enjoyed the fact that this anime resolved the plot points of Takato being in an exposing picture before the last episode. It wasn’t a rushed storyline for the series to end on and instead it chose to have the last episode be a sweet, Christmas episode which did warm my heart.

As problematic as this anime was to watch, I cannot say I didn’t enjoy watching Dakaichi. It was an entertaining and often very steamy watch and at the end of the day I couldn’t help but route for Takato and Junta’s relationship.