Skull-face Bookseller Honda-san is centred on the inner workings of a book store and its various quirky employees. Honda-san, like the name suggests, is a walking talking skeleton who had a hectic job running one of the sections of the bookstore. The series follows or skeleton protagonist and the crazy and often stressful situations which come from working as a bookseller.

Skull–face bookseller Honda-san had been sat in my watch list forever before I decided to sit down and give it a watch. In a time where I needed something quick and fun to watch I thought Honda-san might fit the bill.

The animation style of the series is something that immediately stood out to me when watching the anime. Usually when animation style stands out to me whilst watching it is for all the best reasons. For Honda-san however the only reason it stood out was because of how crude and simple the style was. The style wasn’t awful, far from it but it was just very simple and flat looking. Elements such as shading were nonexistent, the animation of characters often felt stiff and the backgrounds and background characters looked like the bare minimum an anime could do. 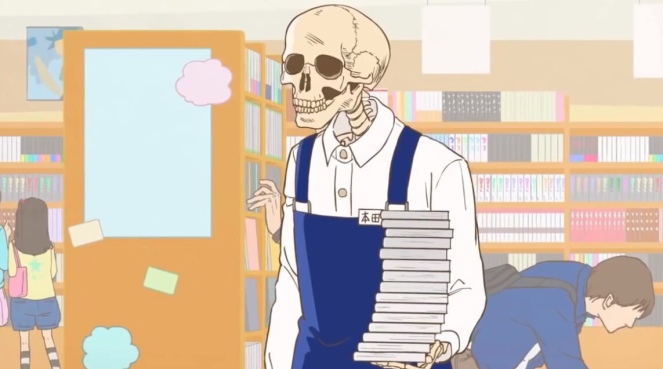 Although the animation is very meek it wasn’t something that was necessarily off putting. The series would probably benefit greatly if they stepped up the animation but the characters personalities helped make up for the lacklustre graphics.

All of the bookstore workers had their own unique look which really added to the overall appeal of the series. Each employee wore a mask or element of some sort which made their characters easy to distinguish and made the stiff animation easier on the eyes.

The fact that the series was supposedly based off real life experience working within a book store and often gave break downs to the inner workings of the store added a fun and interesting twist to the anime whilst also teaching me a thing or two about working in a bookstore. The anime would often take a moment to explain how publishers work with booksellers, how the stock taking works and many more little insights.

The series did make me chuckle from time to time. I wasn’t keeling over laughing but it was amusing enough to keep me from dropping it. The heavy use of English and interactions with foreigners was some of the best humour the show had. As someone who has been a foreigner in Japan I know first hand of the language barrier between English and Japanese. The heavy use of foreigners being interested in yaoi, doujinshi and other strange and unusual books you’d only find in Japan added to the humour.

Whilst Skull-face Bookseller Honda-san is nothing groundbreaking in terms of story or animation, it was an enjoyable but ultimately forgettable series. It’s the kind of anime you stick on when you don’t want something plot heavy. As the series is in 10 minute bursts it also means it is a really quick and easy watch if you are bored.