Dororo is set during the times of Japan where samurai and war lords ruled the land. One of Dororo’s protagonists named Hyakkimaru is born a bloody shell of himself as his father Diago Kagemitsu sacrifices him to twelve demons in order to save his dying land. Hyakkimaru is abandoned by his family and sent off down a river to die and be forgotten. However, this shell of a baby lives and is raised by Jukai, a man who creates prosthetic limbs for the dead in order to honour them. As Hyakkimaru matures, he then embarks upon a journey in order to track down the twelve demons who took his body parts. During his journey, he teams up with the young Dororo who is sent on helping Hyakkimaru defeat the demons and get his body back.

When I first began Dororo I was looking forward to it but wasn’t super hyped about it. However, once I got into the anime I couldn’t stop watching it. The series got me invested in the drama and touched my heart way more than expected. The series is a revamp of its original counterpart which originated in the 1960s. The original 60s anime and manga also titled Dororo features the characters and stories involved in a classic black and white style which has an art style displaying the anime and manga style of the decade. Whilst I have never read or watched the 1960s versions, from comparisons I have seen online, it seems like the 2019 remake it pretty close to the original. 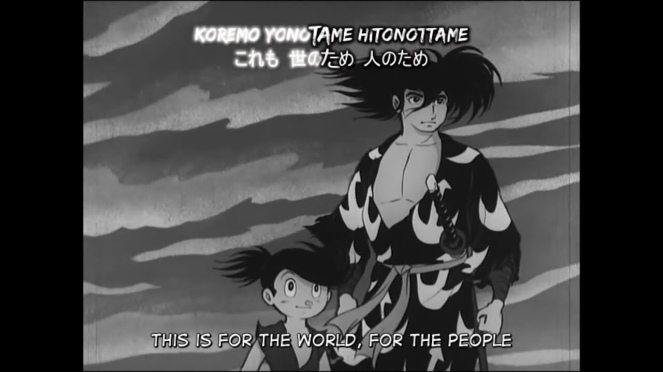 The series starts off with the simple yet awful situation of a grand samurai lord sacrificing his child to 12 demons in order to save his land and people. So basically, he sacrificed one to save many but that still doesn’t excuse his asshole like behaviour of feeding his son to demons. Not cool dad, not cool. The child in question is then born without much of anything other than a bloody bag of bones for a body which is both tragic and lowkey terrifying. This little bag of bones becomes one of our protagonists named Hyakkimaru (not Dororo like I originally thought).

Hyakkimaru has so much character development throughout the anime that by the end I became attached to his character way more than I expected. Since his character begins unable to do much of anything since he is disabled in every way possible, he is almost doll like. The only way he is able to do anything is due to the much more fatherly figure named Jukai who decides to take him in, give him an actual body and raise him as his own. Even still Hyakkimaru takes a long time to actually become human. The anime displays the idea that he transforms from a doll like state to that of a human. Seeing his humanity and understanding of the world around him blossom was something truly special in terms of character development. His relationship with Dororo in particular was lovely to see as the connection between the two of them was slow but authentic.

Since Dororo is set in a time when Japan was filled with war, samurai and superstition it makes sense that the anime would be filled with samurai and fighting and also, demons! It is often tricky in the West to know and learn about Japanese folklore and the various demons/yokai in Japanese mythology. It isn’t a subject that is covered on the whole in the UK as we tend to focus on our own history along with European history and other countries closer to home. As a history nerd, I always love to see historical elements as well as its accompanying myths and legends incorporated into the media and anime like Dororo has given me much more access to Japanese history and its beliefs. One of the most memorable episodes for me was the one with the Japanese Jorogumo as I find yokai  like that truly fascinating and watching these episodes made me want to research them. 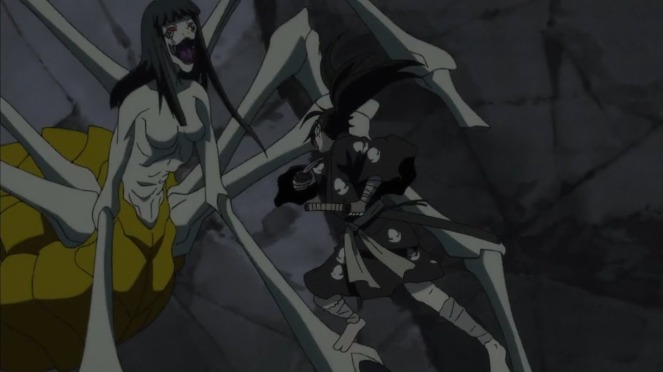 A notable parts of the anime was the music which accompanied the series. The OP and ED songs were all breathtaking pieces of work which worked so well with the overall vibe of the anime. The opening song Kaen by Queen Bee is a beautiful work of rock music mixed with traditional Japanese styles which was perfect for Dororo. The second opening song titled Dororo by ASIAN KUNG-FU GENERATION was far more rock based compared to the first OP but really packed the punch of what the anime was conveying within the second half of the series. Both of the ending songs for Dororo which include Sayonara Gokko by Amazarashi and Yamiyo by Eve both had a more softer tone to them which also worked splendidly.

The animation was also a big part of the anime since the 2019 reboot of Dororo has been compared and contrasted with its original 1960s counterpart. I think this made the animation style much more noticeable for me as it is interesting to see how far animation and anime stylisation has come over the decades. Although the art style for the reboot has changed drastically, I noticed that it paid homage to its predecessor, especially in the first OP sequence with little Dororo’s character. It’s just crazy to see how much anime has changed in terms of style over the years and Dororo really brought that idea home to me. 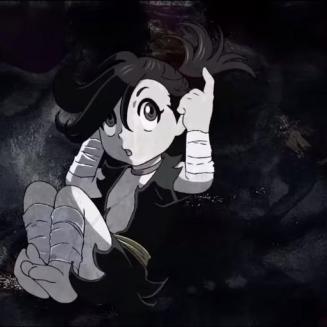 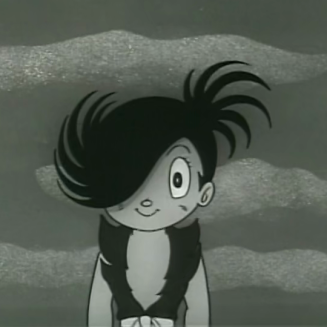 Overall Dororo is an excellent anime series and although I have never watched or read the original series, I’m pretty certain that this 2019 reboot definitely did the source material justice. With an interesting plot, amazing character development and solid music and animation, I think this has to be one of my favourite series to come out of 2019!